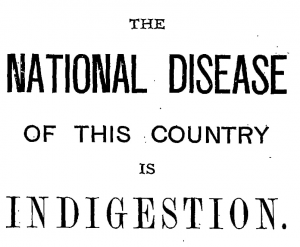 In an age that academic and popular sciences seem closer than ever to unveiling the mysterious role of the human gut in our emotional and mental health, this research interrogates the historical understandings of the relationship between diet, digestion, and emotional ill-health in Britain between 1827 and 1914. Dyspepsia, a hotly debated variety of indigestion, seemed to sweep the British nation during this period with discussions of the ailment pervading British newspapers, medical journals, didactic literature, parliamentary debates and medical reports. Gradually, dyspepsia changed from an elite male point of pride (linked to mental genius) to a nation-wide cause and effect of anxiety, and later to an ailment predominantly attributed to poor working and living conditions, causing anger among those afflicted. Functional digestive ailments also transformed from a point of intense interest to a point of irritation among the medical profession, potentially as a reaction to the explosion of commercial ventures and exaggerated public hysteria around dyspepsia. This research approaches digestion as a much more cultural and social activity than often thought, and argues that the digestion of food – much like its preparation and consumption – should be analysed as a complex and emotionally-laden activity, especially in its failure.  A central focus is the process in which this basic bodily function of eating and digesting becomes imbued with cultural, personal, and political symbolism.

The Gut Feelings Strand is led by Evelien Lemmens, a PhD student on Living with Feeling.