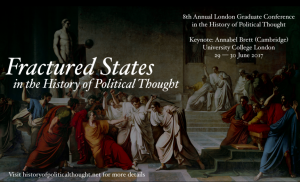 Registration for the 8th Annual London Graduate Conference in the History of Political Thought is now open. Please visit the conference website for programme, registration and further details.

We are pleased to announce the Annual Symposium in the Humanities and Social Sciences on Gareth Stedman Jones’ Karl Marx: Greatness and Illusion (Allen Lane, Penguin: 2016). To view the poster for the event, please click here.

To view the programme, please click here. Registration is essential.

We are pleased to announce the details for this year’s annual Nicolai Rubinstein Lecture in Intellectual History and the History of Political Thought. The lecture will be followed by a drinks reception, to which all are welcome. Booking is essential, please register here.

Title: “The League of Nations Secretariat as a Site of Political Imagination”

What difference did the League of Nations Secretariat make to the practice and theory of international politics?  This talk takes us inside the Secretariat to meet some of the men (and one woman) who headed up its different sections, delving into the records of their internal “kitchen cabinet” meetings to uncover what they themselves thought they were doing.  The League’s high officials talked freely among themselves about the nature and scope of their authority, about how to balance national loyalties and international service, and about how to deal with public complaints of ineffectuality or lack of accountability.  Self-consciously, unevenly and buffeted by political winds, they nonetheless developed strategies and practices that challenged and changed the international system and that still influence it to this day.  Historians and political theorists should pay more attention to the Secretariat as a site for political innovation and political thought.

Susan Pedersen is Morris Professor of British History at Columbia University.  She has written widely on British, European and international politics after 1900.  Her first book examined the way European welfare states came to account for dependence; her second book, a biography of the visionary social theorist and social reformer Eleanor Rathbone, appeared from Yale University Press in 2004.  Pedersen’s new book, The Guardians:  The League of Nations and the Crisis of Empire (Oxford University Press, 2015) was awarded the 2015 Cundill Prize for Historical Literature.

Pedersen received her B.A. and PhD from Harvard University, where she was Professor of History and served for a time as Dean for Undergraduate Education before moving to Columbia in 2003.  She has held fellowships from the Guggenheim Foundation, the Princeton Institute for Advanced Study, the Radcliffe Institute, and the Wissenschaftskolleg zu Berlin, among others.  In 2014 she delivered the Ford Lectures at Oxford University on the subject of “Internationalism and Empire:  British Dilemmas, 1919-39”. She is a regular contributor to the London Review of Books.

In association with the Centre for the Study of the History of Political Thought and the Centre for Law and Society in a Global Context, the Mile End Institute is delighted to welcome Bruce Ackerman, Sterling Professor of Law and Political Science at Yale University to give a lecture Britain at the Constitutional Crossroads – Court, Parliament, and Popular Sovereignty in the Twenty-First Century.

Professor Ackerman’s lecture comes at a critical moment as the Supreme Court deliberates on the role of Parliament in the process of Britain’s withdrawal from the European Union and the judiciary has come under fire in the popular press. His talk will consider the interaction of representative democracy and referendums and the role of the courts in mediating the two. There will be an opportunity for audience Q&A after the lecture.

The event will be chaired by Sionaidh Douglas-Scott, Anniversary Chair in Law at QMUL and co-director of the Centre for Law and Society in a Global Context

To register for the event, please click here. Places are limited, and so booking is essential.

Please click here to watch a recording of the event.

END_OF_DOCUMENT_TOKEN_TO_BE_REPLACED

To celebrate the publication of the important new biography Karl Marx: Greatness and Illusion (Allen Lane) by Professor Gareth Stedman Jones, the School of History, Queen Mary, is hosting a debate between Professor Stedman Jones and Dr Tristram Hunt MP, author of a recent biography of Friedrich Engels. To RSVP for the event, click here.

Update: A video of the event is now available online. Please follow this link to watch it.

The programme for the annual London Summer School in Intellectual History has been announced — click here to view the full list of masterclasses, panel discussions and presentations that will be taking place from 5 – 8 September 2016.

Important update: The venue for the final keynote lecture on the 8th of September has changed to Bancroft 2.40 (2nd floor of the Bancroft Building). As there is another building with a similar name on the Mile End campus, please note that the Bancroft Building has blue windows and is located at the end of the Jewish cemetery.

Graduate conference: Imagined Worlds in the History of Political Thought

The London Graduate Conference in the History of Political Thought will be held on 30th June-1st July, on the theme of 'Imagined Worlds'. The Keynote speaker is Melissa Lane.

Colloquium on The Writings and Speeches of Edmund Burke, Volume IV

A half-day colloquium on the New Clarendon Edition of Edmund Burke, edited by P. J. Marshall and Donald C. Bryant.

‘And the Glory of Europe is Extinguished Forever’: What was the Old Regime?

Historians tend to explain the origins of modern Europe in terms of the demise of ‘the old regime’. The Enlightenment, culminating in the Age of Revolutions, is usually described as the transition between the two epochs. In this lecture, Professor Richard Bourke explores the emergence of the idea of the old regime, and asks whether it adequately captures past experience. If the period since 1750 cannot be coherently viewed in terms of progress from an ancien régime to modernity, we are left with a general question that bears on our current self-understanding: how are we to interpret the meaning of our present?

To listen to a recording of the lecture, click here.