Andrew Fitzmaurice is Professor of the History of Political Thought in the School of History, Queen Mary University of London. His research has focused upon the ideologies of European empires. His early work concerned the political ideas of early American colonisation, notably in Humanism and America: An Intellectual History of American Colonisation, 1500 – 1625 (Cambridge, 2003). More recently he has been concerned with Europeans’ justifications for the appropriation of land and sovereignty in the non-European world from the sixteenth century through to the twentieth, particularly in Sovereignty, Property, and Empire 1500 – 2000 (Cambridge, 2014). His forthcoming monograph, King Leopold’s Ghostwriter, concerns the life of a nineteenth century jurist, Sir Travers Twiss, and the creation of the Congo Free State. His ongoing research interests include the political thought of non-state entities, particularly chartered companies. 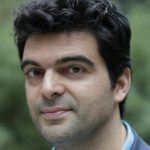 Georgios Varouxakis is Professor of the History of Political Thought in the School of History. His work to date has concentrated on nineteenth- and twentieth-century intellectual history with a particular emphasis on cross-cultural exchanges, comparative and transnational history and mutual perceptions. Georgios has also focused on political thought on nationalism and cosmopolitanism, empire, international political thought, and on the intellectual history of ideas of “Europe” and “the West”, as well as of attitudes towards the EEC/EU. His books include Liberty Abroad: J.S. Mill on International Relations (Cambridge University Press, 2013), Victorian Political Thought on France and the French (Palgrave Macmillan, 2002), Mill on Nationality (Routledge, 2002), and Contemporary France: An Introduction to French Politics and Society (Arnold, 2003, co-authored with David Howarth). He is currently writing a major transnational longue-durée intellectual history of The West: The History of an Idea, to be published by Princeton University Press. He is Co-Director of the QMUL Centre for the Study of the History of Political Thought and also serves as Programme Director for the intercollegiate MA in the History of Political Thought and Intellectual Historyoffered jointly by UCL and QMUL. In the past he has been Research Fellow at University College London, Visiting Research Fellow at Princeton University and Senior Research Fellow at the Lichtenberg-Kolleg, Georg-August-Universität Göttingen.

Dr Leslie James joined Queen Mary in 2017. Prior to this she was a Leverhulme Early Career Fellow at the University of Birmingham, Department of African Studies and Anthropology and a Lecturer in World History at the University of Cambridge. Her broad interests include print cultures, imperial history and the history of anti-imperialism, decolonization, the Cold War, and African and Caribbean history.

Professor Gareth Stedman Jones joined Queen Mary, University of London, in September 2010. He has been, since 1991, Director of the Centre for History and Economics, Cambridge, as well as Professor of Political Science, History Faculty, Cambridge University, between 1997 and 2010, and a Fellow of King’s College, Cambridge University since 1974. He received a BA from Lincoln College, Oxford, and a DPhil from Nuffield College, Oxford where he was later a Research Fellow. He then became an Alexander von Humboldt Stiftung Fellow, at the Goethe University, Frankfurt before taking up a Fellowship and King’s College and a Lectureship and subsequently a Readership in the History Faculty of the University of Cambridge.

Waseem Yaqoob is Lecturer in the History of Political Thought in the School of History, Queen Mary University of London. His research focuses on the history of ideas about politics, economics and international order in the twentieth century. His first book, History and Judgment: The Political Thought of Hannah Arendt, is under review with Princeton University Press. Currently he is working on a project reinterpreting the history of political thought in twentieth-century Germany, in a transnational and imperial context. His other research interests include ideas and cultures of solidarity, and the history of military occupation and civilian resistance in South Asia, particularly in Kashmir.

Dr Jean-Francois Drolet is Senior Lecturer in Politics and International Relations. He studied at the University of Lund, London (LSE) and Oxford. He obtained his D.Phil in 2009 and then went on to take a lectureship at City University for two years before joining Queen Mary in September 2011. His research interests include the intellectual history of Weimar political thought, the political thought of Friedrich Nietzsche, and the intellectual history of American foreign policy. His first book, American Neoconservatism: The Politics and Culture of a Reactionary Idealism, was published on Columbia University Press in 2011 and Oxford University Press (paperback) in 2013. He is presently working on a new book on Nietzsche and international political theory.

Maurizio Isabella was educated at the University of Milan, where he studied Italian literature and Modern History. He then went on to take a Masters’ degree in European Studies at Sidney Sussex College, Cambridge, where he also obtained his doctoral degree in 1998. After a stage at the European Commission, Maurizio worked for five years in Brussels, first as Assistant to the Secretary General of UNICE, the representation of European Industry to the European Institutions, and then as consultant and political analyst advising companies and trade associations on European policies.

Maksymilian (Maks) Del Mar is Reader in Legal Theory, and Co-Director of the Centre for Law and Society in a Global Context, at the Department of Law, Queen Mary University of London. He completed undergraduate degrees in law, literature and philosophy at the University of Queensland, a PhD in Law at the University of Edinburgh, and a Doctorat en sciences sociales at the University of Lausanne. He has a particular interest in the relationship between legal theory and history, and in the history of Scottish jurisprudence. Thanks to a Leverhulme Research Fellowship (2013-2014), he is presently completing a book for Stanford University Press on the relationship between the philosophical and the political in Sir Neil MacCormick’s (1941-2009) life and work.

Dr Isobel Roele joined the Department of Law at QMUL in September 2014. She is co-director of the Centre for Law and Society in a Global Context. She has been a visiting scholar at the University of New South Wales, and at Melbourne Law School, and is a member of various academic and policy networks, including the Legal and Materiality network, the International Law and Society CRN of the Law & Society Association, the UN Association (UK), and the Academic Council on the UN System. She has also worked with Tate Modern’s Tate Exchange programme. She writes about internationalism, particularly international organisations, in multi-disciplinary perspective. This research examines the entanglements of three strange bed-fellows: security, bureaucracy and art. Her work is situated in the field of Law and the Humanities, and her most recent research explores what international lawyers can learn from Art History and Theory.

David Armitage is the Lloyd C. Blankfein Professor of History at Harvard University, an Affiliated Faculty Member at Harvard Law School, and an Honorary Fellow of St Catharine’s College, Cambridge. He is also an Honorary Professor of History at Queen’s University Belfast and at the University of Sydney. He is the author or editor of eighteen books, among them The Ideological Origins of the British Empire (Cambridge UP, 2000), which won the Longman-History Today Book of the Year Award; The Declaration of Independence: A Global History (Harvard UP, 2007), a Times Literary Supplement Book of the Year; The History Manifesto (co-authored, Cambridge UP, 2014), one of the Chronicle of Higher Education’s Most Influential Books of the Past Twenty Years; and, most recently, Civil Wars: A History in Ideas (Knopf, 2017). He is currently completing an edition of John Locke’s colonial writings and working on a global history of Britain’s treaty-making (and treaty-breaking) as well as a study of opera and international law. He lives in Cambridge, Massachusetts, and Canonbury, London.