The QMUL South Asia Forum is pleased to welcome Mircea Raianu for this discussion of his new book, Tata: The Global Corporation that Built Indian Capitalism (Harvard University Press, 2021). Raianu will be in conversation with QMUL's Noam Maggor and Amit S Rai, chaired by Philippa Williams.

Bangladesh at 50: Beyond Rhetoric

Please join us for a three-day online conference on Bangladesh at 50, hosted by the QMUL South Asia Forum. The conference will bring together scholars of, and from, Bangladesh for critical discussions on history, politics, and culture. Going beyond the much-celebrated rhetoric of economic growth and development, scholars will engage with the following questions: what visions emerged in the making of Bangladesh? Who are the powerful and the excluded? What has it meant to live on the margins of the state?  What are the spaces and politics of resistance?  The conference will address issues affecting the lives of marginalised in Bangladesh, exploring a wide-range of topics such as climate change, capitalism, labour rights, LGBT issues, violence and state power. Come along for this urgent discussion at the important juncture of Bangladesh turning 50. This conference will be hosted on Zoom.

Please join the QMUL South Asia Forum for this special In Conversation event with the Karachi-based architect and researcher Marvi Mazhar. Mazhar will share aspects of her recent research on Karachi's urban coastal periphery and its ecology. She will place this work in the context of her longer interest in Karachi's inner city.

Marvi Mazhar is an architect and researcher whose practice combines visual culture, spatial advocacy and interventions. Her architecture and design studio, Marvi Mazhar & Associates, is based in Karachi, Pakistan. Mazhar has recently completed a Masters in Research Architecture at Goldsmiths University of London. 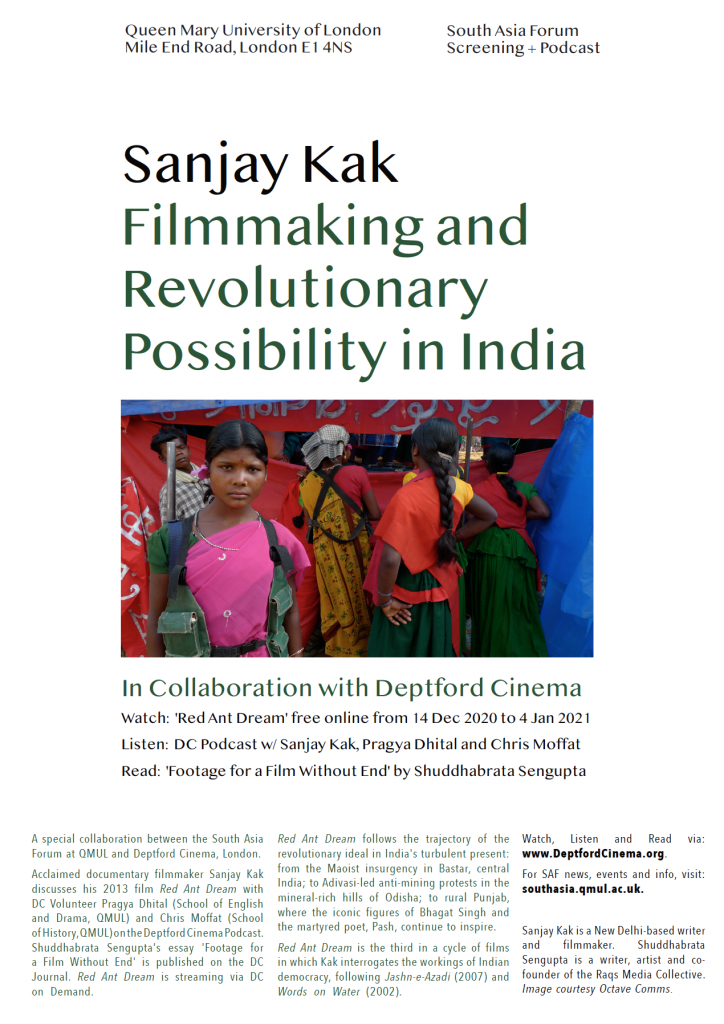 The QM South Asia Forum is pleased to announce a new collaboration with Deptford Cinema, London.
From today, 14 December, until Monday, 4 January, Deptford Cinema will be screening Sanjay Kak’s 2013 film on the life of revolutionary possibility in India, Red Ant Dream. Documenting contemporary struggles against the state, from Bastar to the Niyamgiri Hills to Punjab, the film is a gripping portrait of India’s twenty-first century. It resonates powerfully with the current political moment, when mass protests by farmers have surrounded the capital in New Delhi, opposing government attempts to increase the power of private corporations in the agricultural industry, amongst other demands. Click here to watch.
Alongside the film, Sanjay Kak joined Pragya Dhital (School of English and Drama, QMUL) and Chris Moffat (School of History, QMUL) for an episode of the Deptford Cinema podcast, which you can listen to by clicking here.
On the Deptford Cinema Journal, a short essay by the artist and writer Shuddhabrata Sengupta, ‘Footage for a Film Without End’, reflects on the film and Sanjay Kak’s approach to the documentary form.
Please watch, listen, read and share! 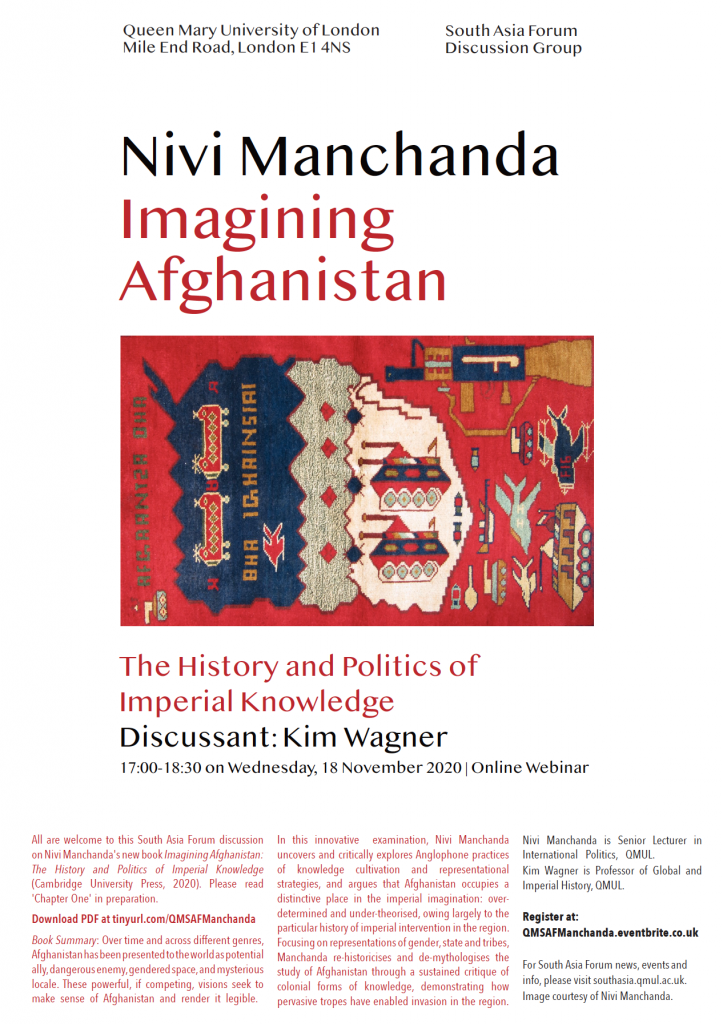 All are welcome to this South Asia Forum discussion on Nivi Manchanda’s new book Imagining Afghanistan: The History and Politics of Imperial Knowledge (Cambridge University Press, 2020). The online webinar will feature contributions from the author, Dr Nivi Manchanda (SPIR, QMUL), and a response from Prof Kim Wagner (History, QMUL).

Please read Chapter 1 in advance of our meeting: tinyurl.com/QMSAFManchanda 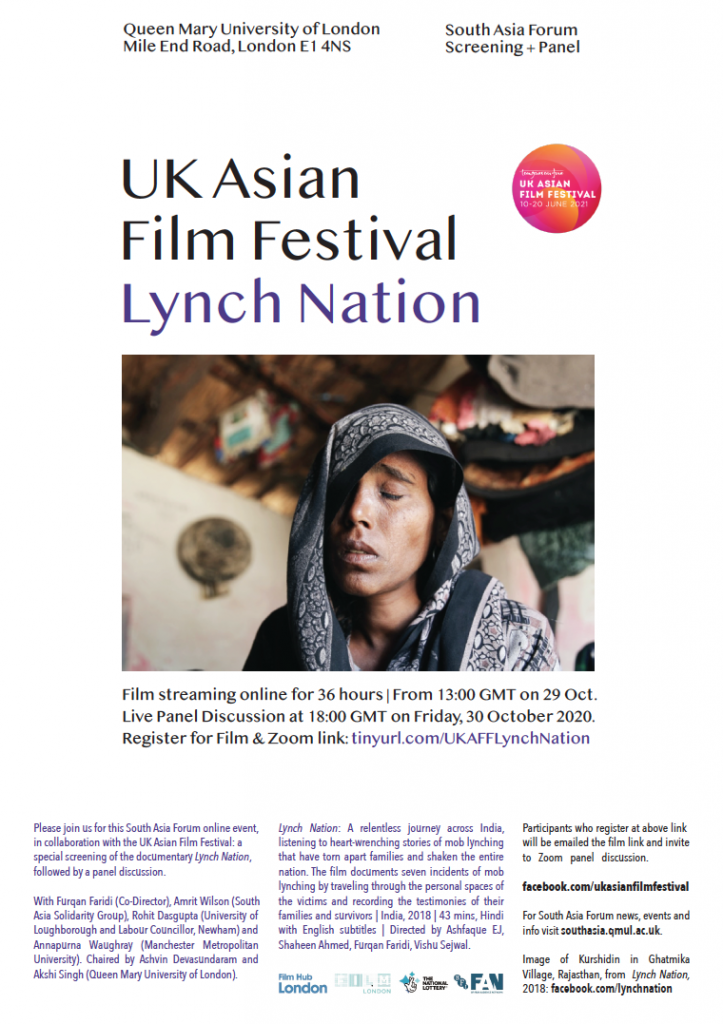 Please join us for this South Asia Forum public event in collaboration with the UK Asian Film Festival. The screening and panel discussion are free but be sure to register to attend via Zoom.

Lynch Nation: A relentless journey across India, listening to heart-wrenching stories of mob lynching that have torn apart families and shaken the entire nation. The film documents seven incidents of mob lynching by traveling through the personal spaces of the victims and recording the testimonies of their families and survivors.

Please join us for this South Asia Forum public event,  in collaboration with the UK Asian Film Festival. Attendance is free but register to attend via Eventbrite.

Lynch Nation: A relentless journey across India, listening to heart-wrenching stories of mob lynching that have torn apart families and shaken the entire nation. The film documents seven incidents of mob lynching by traveling through the personal spaces of the victims and recording the testimonies of their families and survivors.

The 2019-20 Cotterrell Lecture in Sociological Jurisprudence: In this lecture Professor Renisa Mawani will trace the emergence, development, and consequences of the Ingress into India Ordinance across colonial India, Burma, and Siam. Issued by the Indian colonial government in September 1914, in direct response to the anticipated arrival of the Komagata Maru, the ordinance afforded unprecedented power to Indian authorities. It allowed local police and magistrates to apprehend, arrest, and detain anyone suspected of seditious and anti-British sentiments, thereby unleashing a violent expression of juridical power that was justified through the onset of World War I. What is notable in the longer history of India’s ordinances is the prominent role of the sea.

In this lecture, Professor Mawani will read the oceanic elements of the Ingress and trace its expansive reach across the Bay of Bengal – from India to Burma and Siam - through the lives of Indian merchants suspected of sedition and radicalism abroad.

The CLSGC is delighted to be hosting an interdisciplinary symposium on Professor Renisa Mawani’s Across Oceans of Law.

In this South Asia Forum public lecture, photographer and curator Sunil Gupta will critically address issues of race, migration and queer identity with a focus on India in relation to his photographic practice since the 1970s. Over the last thirty years, Gupta’s work has focused on agency and empowerment in India’s gay communities, where until September 2018 homosexuality was a criminal act under colonial-era law, punishable with ten years of imprisonment. RSVP via Eventbrite here: qmsunilgupta.eventbrite.com

Teach-In: ‘Hindutva and the University’

With Mehroosh Tak (Kashmir Solidarity Movement), Meena Dhanda (Wolverhampton), Akanksha Mehta (Goldsmiths) and Rahul Rao (SOAS), chaired by Akshi Singh (QMUL). This panel will discuss the role played by pedagogy and knowledge production in the Hindu nationalist project, as well as the forms of learning, knowledge, and organising that are seen as threats to it. In doing so, it will place the recent attacks on Indian universities within a longer history of military occupations and everyday violence against minorities in India.

All are welcome to the South Asia Forum discussion of our colleague Amit S Rai’s new book, Jugaad Time: Ecologies of Everyday Hacking in India (Duke University Press, 2019). Amit, who is Reader in Creative Industries and Arts Organising at QMUL, will be in conversation with Gerard Hanlon (Professor of Organisational Sociology, QMUL), chaired by Shital Pravinchandra (Lecturer in Comparative Literature, QMUL).

Film Screening: Many Months in Mirya, with Renu Savant

Many Months in Mirya is an anonymous researcher's diary, in video. Drawing from auto-ethnography, the film records the time of a village over three seasons, in 2015 India. Telling stories of characters and forces in the village, natural and human-made, historical and present, the film draws its power from frugal economy and long duration. The film is the winner of the 2017 John Abraham National Award for Best Documentary, Kerala, India. Join us for this free screening, followed by a discussion with the director Renu Savant.

Taking us into the heady world of insurgent sleeper communities in India’s capital, Cities of Sleep trails the lives of two individuals. Shakeel, a young man who has spent seven years sleeping rough, is now having to deal with the “sleep mafia”—goons who capitalise on the scarcity of safe sleeping spaces in the absence of government safety nets. The film follows his attempts to secure a safe sleeping space as the infamous winter rains of Delhi are due. We also meet Ranjeet, who runs a ‘sleep-cinema’ community under a huge double-storey iron bridge that straddles the banks of the Yamuna River. The thin strip of land houses shanty cinemas where over 400 homeless come and sleep through the day for a nominal price. The flooding of the river poses a threat to the people sleeping there every monsoon.

On the night of June 25, 1975, Indira Gandhi declared a state of emergency in India, suspending constitutional rights and rounding up her political opponents in midnight raids across the country. In the twenty-one harrowing months that followed, her regime unleashed a brutal campaign of coercion and intimidation, arresting and torturing people by the tens of thousands, razing slums, and imposing compulsory sterilization on the poor. In spite of this searing experience, the Emergency has received little historical study. Stripping away the comfortable myth that this authoritarian turn was a momentary episode brought on entirely by Indira's crisis of power, Professor Gyan Prakash argues that the political crisis was long in the making and was a turning point in the history of India’s democracy. Prakash focuses on the stories of the imprisonment of leaders to illustrate how this moment raised searching questions about the meanings of public and personal freedom.