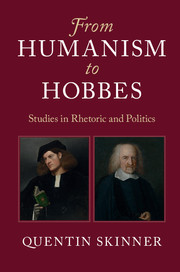 We are pleased to announce the publication of Professor Quentin Skinner’s From Humanism to Hobbes: Studies in Rhetoric and Politics. The collection aims to illustrate the pervasive influence of humanist rhetoric on early-modern literature and philosophy. The first half of the book focuses on the classical rules of judicial rhetoric. One chapter considers the place of these rules in Shakespeare’s The Merchant of Venice, while two others concentrate on the technique of rhetorical redescription, pointing to its use in Machiavelli’s The Prince as well as in several of Shakespeare’s plays, notably Coriolanus. The second half of the book examines the humanist background to the philosophy of Thomas Hobbes. A major new essay discusses his typically humanist preoccupation with the visual presentation of his political ideas, while other chapters explore the rhetorical sources of his theory of persons and personation, thereby offering new insights into his views about citizenship, political representation, rights and obligations and the concept of the state.

‘In these beautifully crafted essays Skinner shows how Machiavelli, Shakespeare and Hobbes use the plenitude of rhetorical techniques of the humanist curriculum to craft persuasively the features of their different yet equally famous texts. Moreover, each confronts differently the chaos that ensues when these radically redescriptive techniques enter into the world they strive to characterise. A masterpiece.’ — James Tully, University of Victoria, British Columbia

‘In these brilliant essays, centered on Thomas Hobbes, Quentin Skinner presents political discourse as rhetoric, forensic and theatric. He shows how tactical maneuver established fictions which became analytical realities. A challenge and a step forward for political theorists and historians of early modern England and Europe.’ — J. G. A. Pocock, The Johns Hopkins University

‘Quentin Skinner is one of our greatest living humanists. He understands from within the classical tradition that nourished thinkers from Machiavelli to Hobbes and wields language with the force of a Renaissance rhetorician. In this timely work, he deepens his long-standing engagement with humanism and with Hobbes, expands his range to Shakespeare and Milton and sheds new light on the conceptual genealogies of virtue and liberty, representation and the state. From Humanism to Hobbes will be indispensable for intellectual historians, political theorists and early modernists alike.’ — David Armitage, Harvard University

‘Gathered as From Humanism to Hobbes: Studies in Rhetoric and Politics, these essays by Quentin Skinner add greatly to our understanding of the pedagogical and intellectual context in which Hobbes’ extraordinary civil science took shape. Even more, though, they offer a masterclass in the particular method of recovering the history of political thought (often referred to as the ‘Cambridge School’) that has justly become synonymous with Skinner himself.’ — Sophia Rosenfeld, Walter H. Annenberg Professor of History, University of Pennsylvania

‘This is a sparkling collection of essays, elegantly constructed and written with grace and wit. It effortlessly affirms Quentin Skinner’s standing as one of the leading historians and finest prose stylists of the day. Each essay considered singly illuminates and develops themes that have animated his recent work – whether the revival of the studia humanitatis and its effects, the visual representation of political ideas, rival conceptions of liberty and political representation, or the genealogy of the modern state – to sometimes striking and revisionary purpose. Considered as a whole, the collection will surely succeed in its design to persuade readers that the cultural shift ‘from humanism to Hobbes’ was by no means so long a march as has sometimes been supposed, even as it raises pointed questions about the long-run consequences of that shift for political understanding and for our collective well-being as citizens.’ — Tim Stanton, University of York