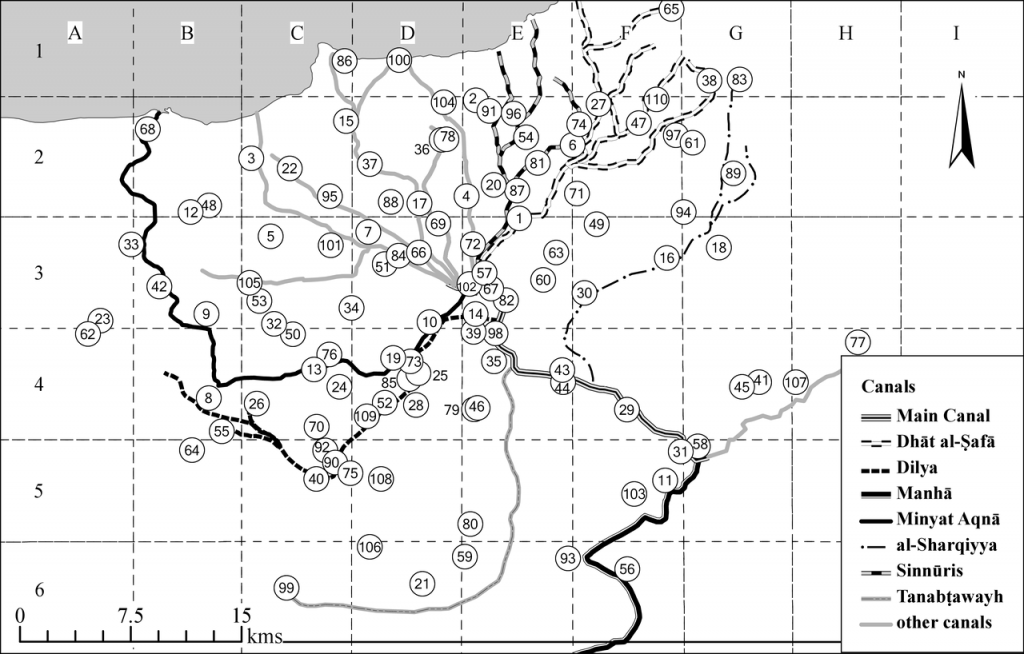 The map above is intended to represent the landscape of Fayyum as it was in the mid-thirteenth century. It was produced by Dr Max Satchell using ESRI ArcGIS software. The map was created from a variety of sources including geo-rectified scans of 1:100,000 mapping of the US Army Map Service, satellite elevation data, and 100,000 scale maps surveyed under the direction of Pierre Jacotin 1788–89 and published in 1826.[1]

The level of Lake Qārūn (ancient Lake Moeris, modern Birkat Qarun) has fluctuated dramatically throughout history,[2] and since the water level of the lake is the most important factor affecting the size of arable land in the depression, it was crucial to determine the approximate water level of the lake during al-Nābulusī’s visit to the region. We followed ʿAlī Shafei Bey’s estimate of the lake’s water-level at -30 m below sea level at the time of al-Nābulusī’s visit.[3] This is about 15 m higher than the current level of -45 m. In recent years, several scientific studies based on pollen records, paleolimnology, and sedimentological analysis have confirmed this as a reasonable estimate for the lake level during the thirteenth century.[4]

Locations of individual villages were reconstructed based on the information provided in the Villages of the Fayyum, as well as previous attempts to map the settlements recorded in the survey, especially the map prepared by Shafei Bey in his ‘Fayoum Irrigation’ essay, and the map of the Fayyum by Heinz Halm in his Ägypten nach den Mamlukischen Lehensregistern.[5] Further information on the history of individual settlements was taken from Muḥammad Ramzī, Al-Qāmūs al-jughrāfī, and Stefan Timm, Das Christlich-Koptische Ägypten in Arabischer Zeit.[6] We have also cross-referenced with modern maps (Google Earth). Explanations and references for villages’ locations appear in the footnotes of the English translation.

The routes of the main canals were drawn based on the map produced by Shafei Bey, who was the irrigation engineer of the Fayyum in the 1940s and drew on intimate familiarity with local conditions. Some modifications were made, however, in line with the Jacotin maps, and with consideration of the topography of the depression. In particular, the route of the Minyat Aqnā canal was modified from the route marked by Shafei Bey, so that it follows the route of the Nazla ravine; the location of the large village of Minyat Aqnā, which lay at the end of that canal, near the shores of Lake Qārūn, was changed accordingly.

Note that not all settlements have been located. Settlements without any identified location (usually hamlets or smaller villages) are listed separately at the end of the table.

We are thankful to Prof. Dominic Rathbone, Prof. Cronelia Römer, and Dr Brendan Haug for providing us with their sound advice about the topography and geography of the Fayyum. Any faults are entirely ours.

This map was produced with the generous support of the Isobel Thornley Fund.

[3] Shafei Bey, ‘Fayoum Irrigation’, pp. 309, 320. Shafei Bey based this estimation on information provided by al-Nābulusī, as well as on geological and archaeological findings.