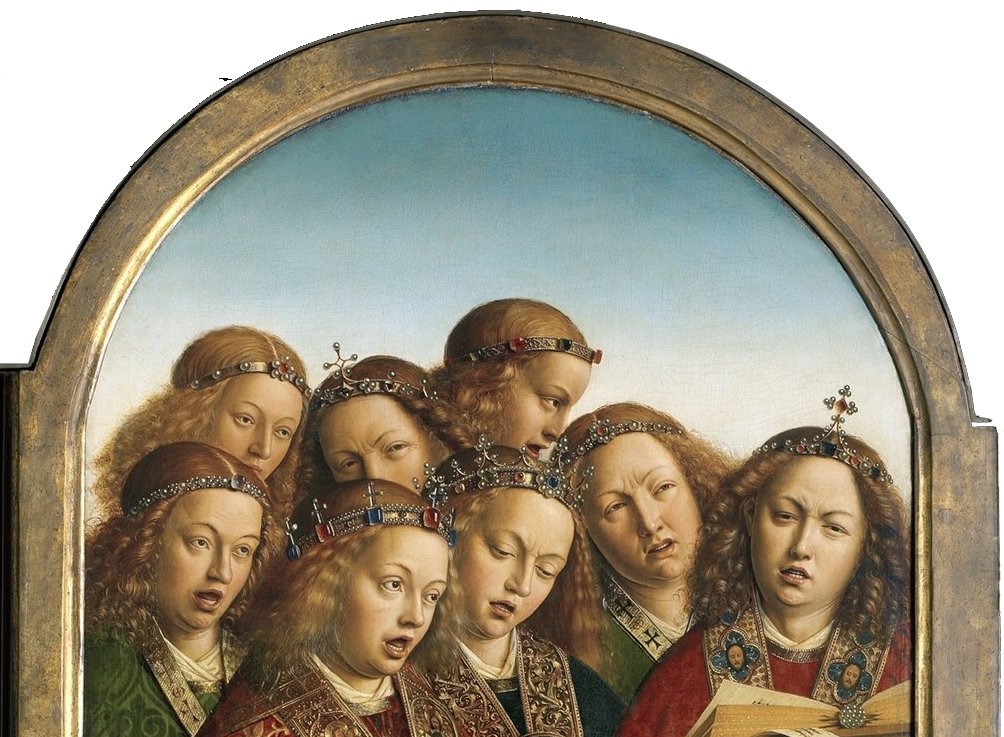 Detail of angels singing from the Ghent Alterpiece. Via Wikimedia commons.

Musicologist Marianne C.E. Gillion compiled a playlist of late medieval and early modern music to accompany and inform the centenary (re)reading of Johan Huizinga’s The Autumn of the Middle Ages. In this blogpost, she discusses the musical landscape of these periods and asks what Huizinga’s work might have looked like if he incorporated information concerning the music of the time. This is the third post in our series celebrating the centenary of Huizinga’s work.

I should start with two confessions. Firstly, before this September I had never read Huizinga. Secondly, when I volunteered to make a playlist of late medieval and early modern music to accompany The Autumn of the Middle Ages reading group, I never thought my offer would be accepted. Much less that I would be invited to write a blogpost from my perspective as a musicologist. I grew worried. How to convey such musical richness in a relatively brief playlist, and an even briefer blogpost? There was also the question with which I began my reading of The Autumn of the Middle Ages, and only grew more pressing with each passing chapter: How might a deeper knowledge of the music of the period have influenced Huizinga’s writings, if at all? He argues that the fine arts reflect the later middle ages incompletely, that it is impossible to understand the culture on the basis of artistic artefacts alone (Payton and Mammitzsch, p. 296). Yet the converse is also true. It is impossible to access the period fully without the arts, and especially without the music that pervaded people’s lives. Huizinga acknowledges that the late medieval world was noisy, and mentions the occasional composer and particular pieces in passing (for example: pp. 1–3, 180, 294, 324). Even so, the world he presents in all its vivid colour seems strangely silent, when nothing could be farther from the truth.

The foundation of musical life was the plainchant used in the celebration of the Mass and the Office. In the Mass, the priest’s prayers were intoned to simple melodic formulas. The unchanging texts—the Ordinary—and the changing texts—the Proper—were sung as solos by the cantor or together by the choir, depending upon their genre. The Divine Office was a series of eight services held over the course of the day, which centred around the chanting of the Psalter. Thousands of pieces of musically varied chant were required to celebrate the Mass and the Office throughout the liturgical year. This repertoire existed in a multitude of melodic dialects, which could vary between regions, cities, institutions, and religious orders. The liturgical calendar was constantly changing, and new feasts required new plainchant for their sung celebration. One such later addition included in the playlist is the Feast of the Recollection of the Blessed Virgin Mary. Its music was composed by Guillaume Dufay (1397–1474) in 1457 as a summation of the six major Marian feasts. Chant was essential to the devotional and musical lives of churches and cloisters, but was not confined there. It was taken into the streets in processions, and people would respond to simple chanted invocations, such as litanies. Plainchant was an integral part of the soundscape; regardless of social position, it was the music most frequently heard.

Despite the prevalence of plainchant, the period is most famous for its polyphony: music with multiple vocal parts. Around 1420, composers from the Franco-Flemish regions began writing in a different style than previously, inspired by the music of English composer John Dunstable (c. 1390–1453). Starting with a dense web of sound, the voice parts break into duets or trios before being subsumed back into the polyphonic texture. As the years passed, the style changed into one of long-breathed lines, with the listener carried along on a flowing current of sound. This style spread throughout the continent as composers travelled; their expertise was highly sought after. Selecting which composers to include in the playlist was challenging. Dufay is generally considered the first composer of the Franco-Flemish “School”, with Gilles Binchois (c. 1400–1600) and Johannes Ockeghem (c. 1410–1497). Josquin des Prez (c. 1450/55–1521) is probably its most famous member, along with Jacob Obrecht (1457/8–1505) and Heinrich Isaac (c. 1450/5–1517). Of the later composers—this music defies Huizinga’s periodisation—the prolific Orlando de Lassus (1530/2–1594) stands out, as do Adrian Willaert (c. 1490–1562) and Jacob Clemens non Papa (1510/15–1555/6). Ultimately, I selected twenty-four individuals, plus some unattributed works. The pieces are arranged by composer, and composers by their approximate year of birth. There is some chronological overlap, but this system allows the permutations of musical style over time to be heard.

These composers were employed by well-endowed cathedrals, churches, and court chapels, which is reflected in their sacred output. Most important was music for the Mass, which centred on the Ordinary: the Kyrie, Gloria, Credo, Sanctus and Benedictus, and Agnus Dei. Many compositional techniques were used to create this music. Masses could be based on pre-existent piece(s) of plainchant, such as Josquin’s Missa Ave Maris Stella from the hymn of the same name. They could also reference devotional songs or larger sacred works. Obrecht’s Missa Maria Zart, the longest ordinary setting of the period, is a beautiful instance of this. As noted by Huizinga, polyphonic masses could reference secular song, to the delight of some and the consternation of others (p. 180). He mentions Dufay’s Missa Se la face ay pale; another example in the playlist is Alexander Agricola’s (c. 1445/6–1506) Missa In mynen zin. Composers did not always rely on earlier works. Josquin’s Missa Hercules dux Ferrariae, for the eponymous duke, is created around a musical theme associated with the vowels of his name. Polyphonic ordinaries did not displace plainchant entirely because the proper of the mass was still chanted. These impressive mass settings were exclusive works, as they required significant resources to perform. They were heard in wealthy institutions, and then sometimes only on festal occasions.

The composition techniques used for the mass ordinary were used in other sacred works. The polyphonic Latin motet, which could be used in the Mass, Office, and devotional services, was one such genre. Many were composed around the four Marian antiphons: Regina caeli, Alma redemptoris mater, Salve regina, and Ave regina caelorum. These works could be designed for alternatim performance—polyphonic and chanted verses alternating—as in Benedictus Appenzeller’s (c. 1480/8–after 1558) Salve regina. Conversely, Ockeghem’s Alma redemptoris mater is entirely polyphonic. Motets could also be tied to specific occasions. Jean Mouton’s (before 1459–1522) Ave virginum gemma virgo Katerina would have been sung on the saint’s feast day, and Pierre de la Rue’s (c. 1452–1518) O salutaris hostia on Corpus Christi. Holy Week inspired compositional creativity in the genres of the Lamentations of Jeremiah for Good Friday and Passions. Professor Laurie Stras recently rediscovered, transcribed, and recorded the Lamentations of Antoine Brumel (c. 1460–after 1512). She argues that the dramatic form and length of the work suggests a devotional rather than a liturgical function. Lassus composed four polyphonic passion settings for the Bavarian Hofkapelle, with the St. Matthew Passion featured in the playlist. For composers employed by churches and court chapels, musical praise of God, the Virgin, and the saints was of primary importance. But it was not their only concern.

Composers frequently set vernacular poetry to music, and these pieces communicate the full range of human experience. Huizinga references the onomatopoeiac chansons of Clément Janequin (c. 1485–after 1558), which transmit the cries of birds, battles, and street vendors (p. 324). While stirring, these are not indicative of the vernacular song repertoire. A variety of musical forms were used, depending upon the period, language, and poem. Ockeghem’s touching rondeau Fors seulement takes one of the fixed forms of fourteenth- and fifteenth- century French song. This popular piece inspired numerous reworkings by subsequent composers, including de la Rue. During the sixteenth century, the madrigal became a dominant form of Italian secular music. Philippe Verdelot (c. 1480/5–before 1552) was one of the first and most prolific composers of this genre. His Fuggi, fuggi, cor mio is included in the playlist, as is Willaert’s Vecchie letrose. What might make vernacular song so appealing is how relatable the works remain even at this distance. Clemens’ Adieu mon esperance expresses heartbreak with its clashing tones. In contrast, the macaronic Lucescit jam o socii by Lassus describes a boisterous, boozy meal. Then as now, music accompanied people through life, both reflecting and shaping society. This is why knowledge of music is essential to fully understand culture of this period – or indeed of any historical period.

As I began writing, I worried that I could not do justice to late medieval and early modern music, and indeed there is much I had to omit due to lack of space. I could not discuss instrumental repertoire, delve into music theory, investigate conventual music, or explore works with political associations – although pieces that illustrate all of these concepts are included in the playlist. Neither could I justify the selection of all 156 musical works. Some were chosen simply because I find them beautiful: Isaac’s Virgo prudentissima; Mouton’s Tota pulchra est; settings of Regina coeli by Nicolas Gombert (c. 1495–c. 1560) and by Agricola; de la Rue’s Missa de Septem doloribus. It might be a cliché, but I must let the music “speak [sound] for itself”, as it can when given the chance. Of course, I am unable to answer the question that haunted me throughout my reading. It is impossible to know how a greater knowledge of the rich musical life of the period might have influenced Huizinga’s thoughts in The Autumn of the Middle Ages. If I were cynical, I could say that he would have highlighted only the facts that fit the overarching frame of his narrative. As I am optimistic, I will hope that, however imperfectly, he would have woven the music throughout his book, depicting a world as gloriously musical as it was vibrantly colourful.

1 thought on “Sounding Huizinga: The Autumn of the Middle Ages Playlist”

Dr. Marianne C.E. Gillion is a musicologist and an FWO postdoctoral research fellow at KU Leuven and the Alamire Foundation with her project According to Antwerp, Reformed to Rome: Music, Liturgies, and Identities in the Bishopric of Antwerp, 1559–1801. Her research interests include, the interconfessional implications of plainchant, and the material and cultural histories of liturgical books.

Sounding Huizinga: The Autumn of the Middle Ages Playlist was first published on Wednesday 22nd January, 2020