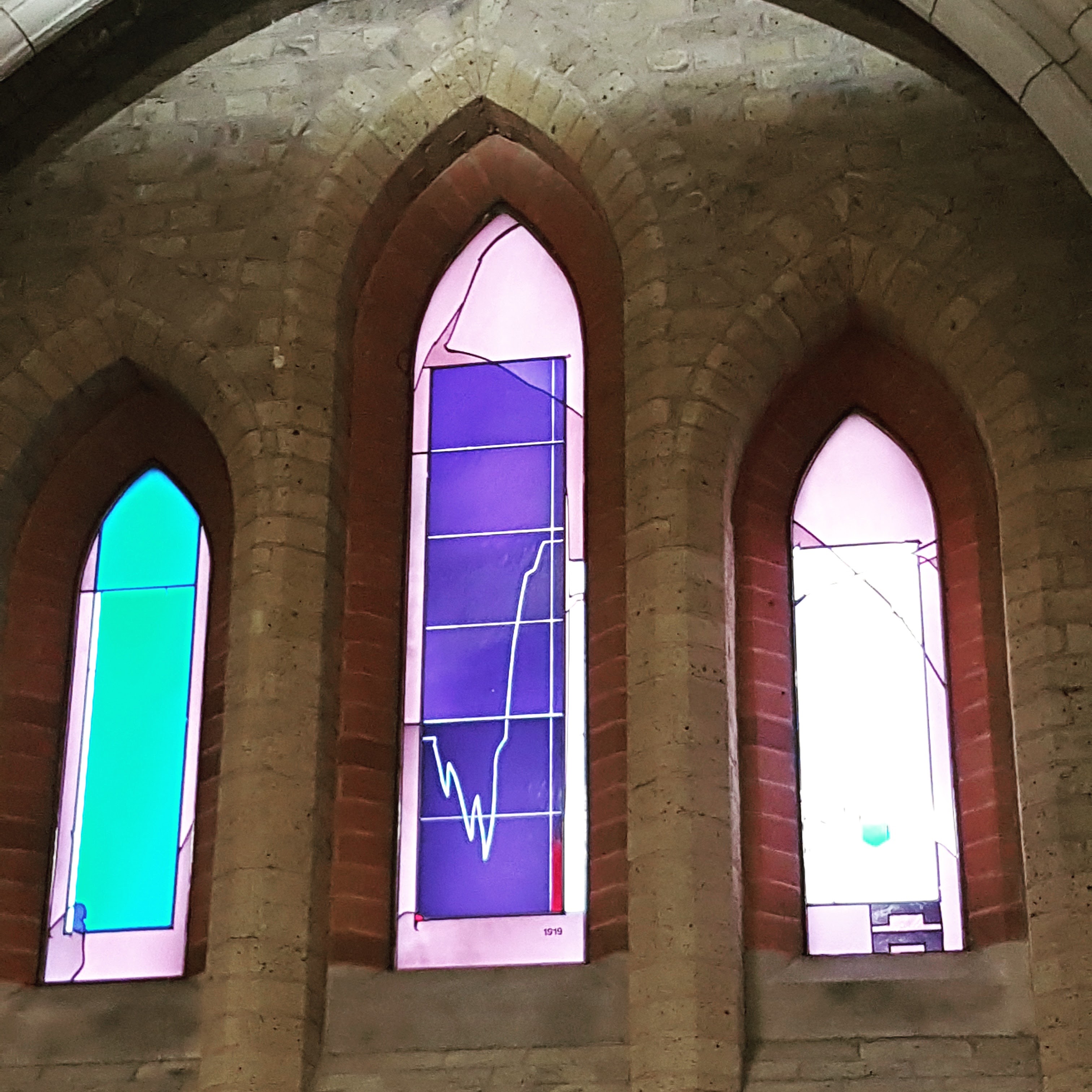 Hidden in a Grade 3-listed church in Whitechapel is a remarkable stained-glass window commemorating the ‘heroes and heroines’ of the 1918-19 influenza pandemic. As the centenary of the pandemic looms, Mark Honigsbaum reveals how the window disappeared from view and what it says about our culture of forgetting.

“Why did Americans pay so little attention to the pandemic in 1918 and why have they so thoroughly forgotten it since?” – Alfred Crosby, America’s Forgotten Pandemic.

It is a question that could be asked of Britons too. From Kent to Kinross you will find memorials to the fallen of the First World War, but similar monuments to victims of the 1918-19 Spanish influenza pandemic are singularly absent from British towns and villages.

There is an exception to this rule, however, and I am pleased to report that it can be found in the East End of London. I am referring to the ‘Influenza Pandemic Window – Heroes and Heroines of 1918-19’ in the Medical Library of the Royal London Hospital in the church of St Augustine with St Phillip in Whitechapel.

Never heard of it? You’re not alone. When I visited the library last week with my colleague Hannah Mawdsley and asked to be directed to the window, my inquiry elicited blank looks from medical students. Even the librarian seemed to be unaware of the window’s existence, and she was sitting just a few metres from it!

I do not write this to show up the librarian or flaunt my superior knowledge of all things pandemic-related. On the contrary, until two weeks ago I was similarly ignorant of the window’s existence and I have written two books on the Spanish flu. Rather, it is to show how rapidly events that ought to be remembered better fade from cultural memory ­– even within an institution and discipline concerned to make them more visible.

But before we get to my shortcomings as a medical and cultural historian, first a little background on the window or, I should say, windows, for the influenza pandemic window is part of a set of eight glass panels consecrated to medical themes. The work of a German graphic artist, Johannes Schreiter, the windows were commissioned for the library in 1990, but took 12 years to complete – a reflection perhaps of the logistical challenge involved in taking the measure of St Augustine, once considered the ‘cathedral of the East End’, and doing justice to the diverse medical subject matter (the other windows commemorate the London Hospital, gastroenterology, AIDS/HIV, medical ethics, medical diagnosis, molecular biology, and Joseph Merrick, ‘the Elephant Man’, who died in bed at the London Hospital in 1890).

There is no plaque to indicate which one is the pandemic window and unless you have spent as much time as I have studying influenza mortality curves you might miss it, which perhaps explains the librarian’s initial puzzlement (to her credit, she later found a brochure with details about the installation). In actual fact, like the other windows in the series, it is a triptych. The central window in the panel is coloured purple with a zigzagging line that descends gradually by way of a couple of jagged peaks and troughs, before shooting precipitously to a vertiginous peak in the winter of 1918-19. That was when the epidemic burned most fiercely and deaths from flu and related pneumonias in the East End and other parts of London were running at around 2,500 a week. 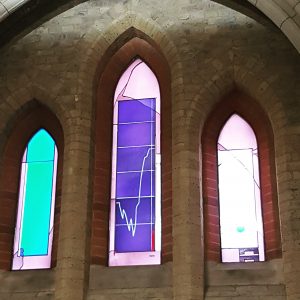 The purple tint and the blue window to its left reminded me of one of the most prominent features of the flu: the deathly blue discolouration of patients’ faces and lips as, in their final death throes, oxygen was leeched from their red blood cells as their lungs filled with choking fluids. Physicians who tended to these fatal pneumonia cases called it the “blue death” (the technical term was heliotrope cyanosis, after the powder-blue flower beloved of British gardeners), but in the last stages of illness, as it became harder to breathe, the heliotrope marks turned dark purple and, eventually, a ghastly mahogany colour.

In fact, as I discovered when I caught up with John Oxford, Emeritus Professor of Virology at Barts and The London School of Medicine and Dentistry, who collaborated closely with Schreiter to realise the window’s installation in 2002, these references are probably unintentional. Instead, Oxford says the window was inspired by one of his favourite paintings, Gaugin’s D’où Venons Nous? Que Sommes Nous? Où Allons Nous? (‘Where Do We Come From? What Are We? Where Are We Going?’), which hangs in the Museum of Fine Arts in Boston. The phrase is a reference to a catechism instilled in Gaugin by his boyhood Catholic teacher and which returned to the post-impressionist artist in 1891 when, old and alone in Tahiti following the death of his daughter, he decided to undertake what he intended to be his last work. Taking a piece of sackcloth measuring 4m by 1.7m, Gaugin stretched the canvas over a frame and began creating what many critics consider to be his masterpiece. The painting is enigmatic and contains numerous human, animal, and symbolic figures arranged across an island landscape. The sea and Tahiti’s volcanic mountains are visible in the background, but one’s eye is drawn immediately to a towering figure at the centre of the canvas picking fruit, and to his right, a sleeping child and three crouching women. Just behind them, dressed in purple, are two figures deep in conversation and, in front of them, an enormous crouching figure. As Gaugin explained in 1898 in a letter to an art critic friend, the crouching figure is intentionally out of proportion and ‘stares in astonishment upon these two, who dare to think of their destiny.’

Gaugin’s painting is clearly open to multiple interpretations, but according to Oxford the blue window in the first pandemic panel symbolizes healing, while the purple panel ‘symbolizes the grief and suffering of those who gave their lives to save others’. Oxford points out that the casualties of Spanish flu included not only soldiers and civilians on the Home Front, but nurses, doctors and pathologists who cared for the sick or, risking exposure to the virus, conducted autopsies on victims’ swollen and bloodied lungs at the London Hospital. ‘Like those who died in the fighting, they were also heroes and heroines,’ explained Oxford. However, the only explicit reference to the gorier aspects of the pandemic are the faint blood-red stains at the foot of each mortality peak, the lower one on the left marking the deaths at the height of the previous ‘Russian’ flu pandemic of 1890, and the second one the mortality from the Spanish flu in the autumn and winter of 1918-19.

The losses were dreadful: in Britain, a quarter of a million civilians perished – as many as died taking Passchendaele from the Germans in 1917. Worldwide, the death toll from the pandemic was 50 million, possibly more. In a cruel twist of fate, the majority of deaths occurred in the final months of the war, just as people were celebrating the Armistice. The demographic impact was dramatic, so much so that for the first time since the government began keeping records, Britain’s death rate exceeded its birth rate. As Crosby put it, ‘Nothing else – no infection, no war, no famine – has ever killed so many in as short a period.’

Yet for all its killing power, the pandemic left few emotional traces. Why this was so has long puzzled social and cultural historians. (Full disclosure: Crosby is not the only scholar to lament the absence of memoirs, novels or other artistic productions to the flu – in 2008 I published a book, Living With Enza, subtitled ‘The forgotten story of Britain and the great flu pandemic of 1918’.) Even at the time many doctors and medical students failed to register the pandemic. This seems paradoxical until you realise that while the Spanish flu was terrible for those who witnessed its depredations close up, only a quarter of the population was affected and only 2% died.  ‘For the other 98%, it was just like any other flu,’ said Oxford. As The Times put it in an editorial at the height of the deadly second wave of the pandemic: ‘Never since the Black Death has such a plague swept over the face of the world and never, perhaps, has a plague been more stoically accepted.’

Whether Britons will be so stoical should a strain of pandemic flu like the one in 1918 revisit these shores is hard to tell. Certainly, the wide availability of antibiotics and the NHS, neither of which existed in 1918, means there is far less reason to panic. On the other hand, because of social media it is highly likely that news of the pandemic will be telegraphed well in advance of its arrival – something that due to wartime censorship didn’t happen in 1918. Greater global connectivity means the virus would also likely travel more quickly to all parts of the world and because of the growth in the world’s population since 1918 the casualties would also be numerically greater.

On the other hand, the Spanish flu pandemic may have been a one off, part of the unique ecological conditions that prevailed in 1918. With the centenary of the pandemic looming in 2018, that is a thought worth keeping in mind as you contemplate the pandemic window and come to your own conclusion about the symbolism of Schreiter’s colour scheme.

Mark Honigsbaum and Hannah Mawdsley are making a series of podcasts about the 1918-19 influenza pandemic for release in 2018. Crosby’s contribution to the historiography of the pandemic is discussed in the third-year QMUL history module, HST6601 ‘War, Epidemics and Civilization.’

1 thought on “Through a glass brightly: Whitechapel’s pandemic window”

Mark Honigsbaum is a Wellcome Research Fellow in the School of History. A specialist in the history of bacteriology and epidemiology, he is the author of four books, including Living With Enza: The Forgotten Story of Britain and the Great Flu Pandemic of 1918. He is currently working on an intellectual history of disease ecology.