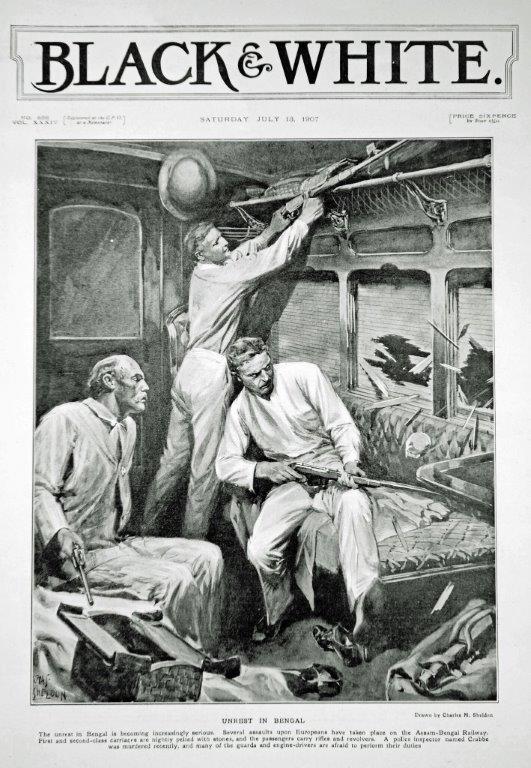 To mark Indian Independence Day, we are publishing the next in our series of Take Five interviews, Leverhulme Early Career Research Fellow and historian of India, Mark Condos.

How would you introduce your research to someone at a party?

Well, I suppose this would depend on whether I thought the person in question was trying to flirt with me and how much I was trying to talk myself up. In all likelihood, however, I think most people who ask this question at a party are probably just trying to be polite, and aren’t really interested in a long-winded, academic response. With this in mind, I would begin with what I think is quite an intriguing paradox: that even at height of its power in the late nineteenth century, the British Empire (arguably the greatest empire the world had ever seen), remained a fitfully insecure and uncertain endeavour. Despite their apparent mastery over the globe, Britons across the empire frequently expressed doubt, anxiety, and even fear about the viability of imperial dominion.

From there, I would issue a provocation: that it is only by studying this sense of insecurity, or perceived vulnerability, that we can fully understand the violent and authoritarian tendencies of imperialism. Indeed, nowhere can this be more vividly demonstrated than in India, the so-called ‘Jewel’ in the crown, and its strategically vital province of Punjab, where a heady colonial cocktail of insecurity, paranoia, and fear became central to the unfolding of British power and helped fuel some of the most extreme and violent tendencies of the imperial project.

More recently, I’ve become interested in areas where colonial domination and control were at their weakest: frontiers and borderlands. The transgressive and ‘unruly’ nature of these fringe territories were a frequent headache to imperial powers like the British and French, and prompted all sorts of interesting (often quite coercive and violent) methods of trying to assert colonial control over them.

How did you find your way to this latest project?

One of the most striking aspects of my previous research on colonial insecurity in Punjab was the way in which the North-West Frontier of British India remained a constant source of anxiety throughout the entire period of British rule. Whether it was the threat posed by ‘fanatical’ Muslim assassins, (somewhat exaggerated) fears of a potential Russian invasion, or the party-pooping antics of Pashtun and Baluchi tribesmen who apparently enjoyed attacking British outposts while they were trying to host dinner parties and balls[1], even the most confident British colonial officials along the frontier remained acutely aware of how tenuous their hold over the region really was. This, in turn, prompted various coercive  economic, legal, and political interventions in attempt to assert their authority.

From this, I became interested in the complementary and divergent logics that determined how colonial authorities attempted to govern similarly ‘unruly’ and ‘dangerous’ borderlands across the globe. What drew me toward a comparative look at how French and British colonial authorities attempted to police these regions was the fact that these two imperial rivals often looked to each other as the yardstick with which to measure their respective accomplishments.

Why should people care about your research?

Frontiers and borderlands are very interesting because they are both physical and abstract.  They are physical insofar as they are geographically delineated territories of corporeal violence, but abstract because they also become the site for all sorts of debates about the nature and meaning of imperial sovereignty and its attendant political and legal structures.

I think that if we want to better understand the dynamics about how states – both colonial and non-colonial alike – function, it is necessary to look more closely at how they attempt to incorporate and rule over marginal areas outside their control. Most states, after all, began as tiny polities, surrounded by vast stretches of unknown territory beyond their borders. Frontiers marked the break between ‘civilization’ and ‘barbarism’, and were only gradually pushed back as states grew in size and learned to assert their authority.

Studying the French and British empires together is important because these were the two largest European empires during the late nineteenth and early twentieth centuries, and their policies of drawing up borders and frontiers continues to have a profound impact on postcolonial states across the globe – from Morocco and Algeria, to Pakistan, India, and Vietnam. They can also tell us a lot about how self-proclaimed ‘liberal,’ civilizing, and modernizing powers operated in areas where their power and influence was at its weakest, and where they often didn’t play by even their own rules.

What is the most interesting thing you’ve found so far?

One of the most fascinating things I’ve noticed is that despite repeated attempts by French and British imperial authorities to work together in policing and managing troublesome frontier regions, they remained remarkably bad at this. In India, for instance, anti-colonial revolutionaries were able to capitalize on the existence of small French territorial enclaves scattered across the subcontinent – places like Pondicherry and especially Chandernagore – to smuggle men, arms, and propaganda into British India with relative ease. British attempts to crack down on these seditious networks were regularly thwarted by French insistence on maintaining the territorial sovereignty of their tiny possessions. This meant that the British had to play by French rules when attempting to apprehend terrorists who fled to their territory, and officers frequently complained that the slow and obvious French methods of organizing raids on the houses of suspected Indian revolutionaries in settlements like Chandernagore gave these revolutionaries plenty of time to escape or destroy evidence, effectively hamstringing their efforts.

This not only raises interesting historical questions about the nature of imperial sovereignty and judicial authority, but it also provides interesting precursors to the so-called ‘War on Terror’ and ongoing efforts by international authorities to disrupt radical terror networks.

What does it mean to you to be a historian?

Considering that we are now apparently living in the ‘post-truth’ age, I think it’s more vital than ever that we have historians who try to engage with the public and provide them with accessible, yet academically rigorous explanations of our shared history. This entails not only telling the story of how we arrived where we are today, but also a critical attempt to understand the ways various narratives or myths of history are continually deployed and reformulated as a part of contemporary political projects.

A good example of this can be seen in the way that a great deal of rhetoric deployed by the ‘leave’ campaign during the EU referendum last June was infused with powerful language about Britain reassuming its proper place as a global leader. While there are many who have criticized this view as a sort of ‘imperial nostalgia’, I think it would be more useful to understand this in terms of what Gideon Rachmann referred to in a recent article in the Financial Times as a form of ‘imperial amnesia’ – that is to say, a problematic and simplistic understanding of how Britain attained the global prominence it did during its imperial heyday. Britannia may have ruled the waves, and England may have been a great free-trading nation, but none of this would have been possible without the aid of gunboats to blast open foreign ports, armies to force reluctant rulers into submission (usually recruited from local colonized peoples), and the exploitation of massive amounts of coerced labour.

Indeed, one thing I find particularly striking about those who tend to forget or conveniently overlook these facts – the same people who often present the march of empire as some sort of irrepressible and inevitable force – also seem to miss how tenuous, uncertain, and anxious this imperial enterprise was. Empire entailed numerous setbacks, failures, and military disasters which provided a sobering counterweight to imperial hubris. Thus, while narratives about British ‘daring and pluck’, or the ‘stiff upper-lip’ may excite the imagination, but they often belie the much messier, contested, and problematic aspects of the imperial project.

[1] British women were reportedly very miffed by the fact that this meant that officers almost invariably wore loaded revolvers on their hips, which made it quite awkward and difficult to dance.

Mark Condos is a Leverhulme Early Career Research Fellow in History here at QMUL. He is the author of the recent book, The Insecurity State: Punjab and the Making of Colonial Power in British India (Cambridge: Cambridge University Press, 2017). His current project examines how different forms of legal and extrajudicial violence were incorporated by the British and French empires in their attempts to police different frontier regions.