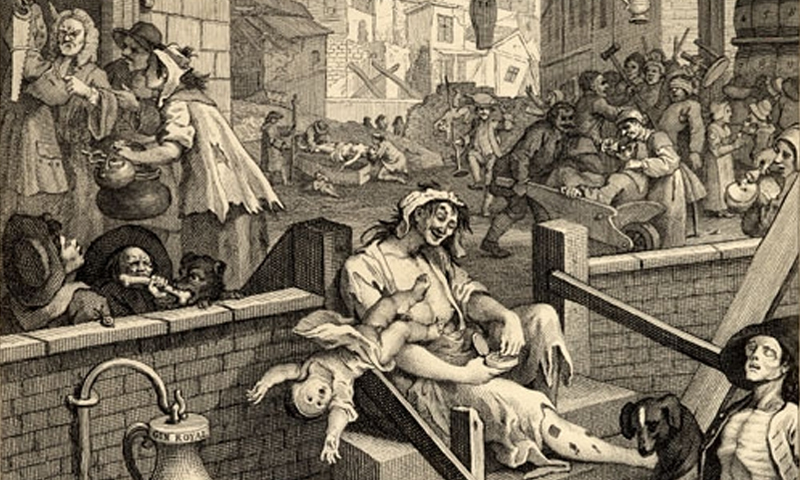 In the second of our Take Five series of interviews with historians at QMUL, we meet Leverhulme Early Career Fellow Oskar Cox Jensen, whose current research project focuses on life on and around London’s streets in the in the eighteenth and nineteenth centuries.

How would you introduce your research to someone at a party?

Heaven forefend I’d ever do such a thing! Or be at so slow a party. In any case, this used to be easy; I’d just say ‘I study song’, and, if pressed to elaborate, songs and singing, mostly in Britain, mostly in the eighteenth and nineteenth centuries. At this point I’d usually be asked to sing something, which – though a little trying – is certainly something more historians should do: any way to revivify dead text is welcome.

These days I have segued to a new project: the life stories of people living and working in the London street, from the later eighteenth to the mid-nineteenth century. I’m attempting to write a biography of lots of people, from infancy to old age – and not forgetting to think about the animals that shared their lives too. Trying to amplify hushed and unheard voices, and to turn the crowd and the type back into individuals. For this reason, incidentally, I’m trying to avoid Henry Mayhew as much as possible. Mostly, people’s dads get interested in this project, which I hope is a good sign.

How did you find your way to this latest project?

For four years, I was in the music department at KCL, working on the ERC project ‘Music in London, 1800–1851’, and developing my interest in ballad-singers – those men, women, and children, who sang and sold songs in the street. I’m currently trying to finish that book, and I think it’s an important one – not because of me, obviously, but because these people were absolutely central to cultural, social, and political life, especially in the metropolis, for three hundred years.

While researching that book, I kept turning up all these wonderful anecdotes and incidents concerning other street-workers who weren’t ballad-singers, and caught glimpses of this whole economy and way of experiencing the world, that seemed utterly fascinating but that didn’t fit into that book. Hence, I suppose, the new one.

Why should people care about your research?

A lot of people are interested in the urban street, but the path usually taken, from Walter Benjamin to Michel de Certeau, is that of the elite walker – the academic’s avatar – who is proceeding in a linear direction (however digressively) and to whom the street is constructed as an alien space. But until quite recently, streets were as much – more – about being in as passing through, and an awful lot of people were very comfortable with inhabiting that space, for all sorts of purposes. Which seems worth thinking about.

I also think there is fresh value in coming at social history from a perspective informed by culture and biography, complementing all that fine work that is, at heart, statistically, with a microcosmic approach that elevates mundane, lower-class experience to the stuff of credible biography. I’m not especially concerned with verifiable fact, but more with plausible experience and personal responses – I hope to spend a lot of time, for example, talking to the wonderful people here in the Centre for the History of the Emotions. If they’ll let me.

What is the most interesting thing you’ve found so far?

I hate to say ‘spoilers’ but I actually feel reluctant to throw out too much detail about any particular life story I’ve turned up thus far – from the woman who stole a baby to help her begging, to the man whose unusual headgear rivalled Vermeer’s Hat as a global adventure, from the boy too ashamed to shout out ‘hot cross buns’ in case someone recognised him, to the young serving maid so affected by an execution ballad that she took her own life.

There’s one thing that really shook me recently, and it’s not, strictly speaking, a part of street life, but an aspect of slum-dwelling. In the 1850s, George Godwin, F.R.S. and editor of The Builder, invited himself into a vast number of homes in the rookeries. Imagine his horror:

‘when opening a cupboard in a miserable room in the neighbourhood of Gray’s-inn-lane, we found, shut up with the bread and some other matters, the body of a child, without a coffin, but decently disposed. The child had been dead a week: on one of the shelves was its little mug, marked “Mary Ann,” with some broken crockery.’

Apparently this was common practice:

‘In a single room the family sleep, work, eat, and perform the various duties of life in company with the dead, and the evil is increased by the length of time the poverty of parties obliges them to retain the corpse until what they consider proper preparations have been made for the funeral: this seldom takes place in less than a week’.

Now, forget Godwin’s revulsion; what must it have been like, to be the sibling of such a child, young and superstitious, living and sleeping for up to a fortnight in the same room as your newly deceased brother or sister? ‘Unimaginable’ isn’t good enough here: this is a world we need to do at least as well as Godwin, who managed to avoid outright condemnation of the practice, writing: ‘The feeling which prompts it is a holy one: far be in from us to depreciate it, still less to scoff’. In this project, I cannot come at the knowledge I seek through purely empirical means, but only by empathy. Wish me luck . . .

What does it mean to you to be a historian?

As usual, context is key here – I feel very differently about this depending on the company I’m keeping. I’ve spent the past four years in a music department, and even before that I considered myself to be thoroughly interdisciplinary, my doctoral research convincing me that any historian interested in culture has to engage with the media they’re looking at – or listening to – and its conventions, structures, and aesthetics. It helps, for instance, to know what makes a good song – or play, news item, caricature, and so on – both in composition and in performance, if you want to study that medium as a historian. But in taking that step you cross a line.

I am a historian, however, and I feel it when working – as I do, primarily – with literary scholars, musicologists, and art historians. For us, the thing itself (I daren’t say the ‘work’ or ‘object’ but that is what I mean) is not the ultimate location of interest, nor is its maker, but rather what it illuminates about the conditions in which it was produced. Is that fair?

More cynically, I never feel more a historian than when a roundtable discussion across disciplines (crewed by, say, a motley band of Romanticists and sound studies scholars) breaks free of its moorings in actual stuff and rises into more rarified, ethereal territory, where the excitement of pure discourse seems to intoxicate everyone but me, the lackwit, clodhopping historian, who clings to anything solid near at hand (a source, a date, a human being) and hopes the whole thing will land again in something resembling the tangible, lived past.

Oskar Cox Jensen is a Leverhulme Fellow in History here at QMUL, writing a book about street workers in eighteenth and nineteenth-century London. His first book, Napoleon and British Song (2015) stemmed from his doctorate in History at Christ Church, Oxford. His second, The London Ballad-Singer (in preparation) comes out of four years in the Music Department at KCL, on the ERC-funded project ‘Music in London, 1800–1851’. A co-edited volume, Charles Dibdin and Late Georgian Culture, is coming out with OUP later this year.