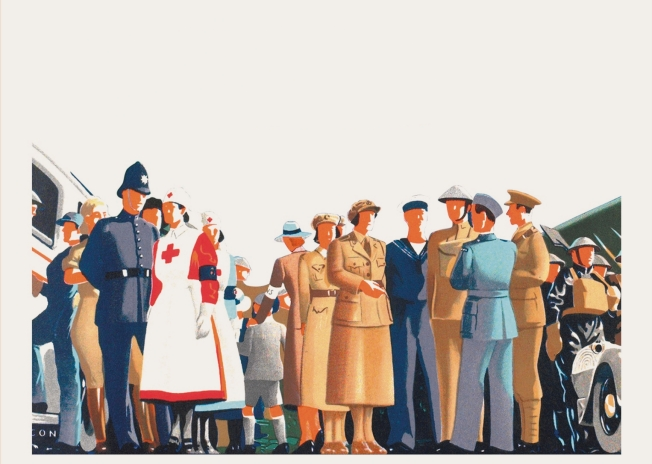 When Winston Churchill formed a government in May 1940, it was by no means inevitable that it would prove a success. In an exclusive extract from his new book, Britain’s War: Into Battle, 1937-1941, Dr Dan Todman paints a vivid picture of Churchill and his inner circle in 1940. The new Prime Minister had a restless mind, garish dressing gowns, and a buccaneering style. Dr Todman’s book has recently been shortlisted for the Longman History Today book prize 2017.

Long before he got to work, Sir Horace Wilson must have known that 11 May 1940 was going to be a difficult day. The previous evening it had been announced that Neville Chamberlain had resigned and was going to be replaced by Winston Churchill. As Wilson, the permanent secretary of the Treasury and the head of the Civil Service, walked through 10 Downing Street on the way to the office he had occupied since 1935, the junior officials were all aflutter. Who was going to go and who would be kept on? As soon as Wilson opened the door to his room, he got part of the answer.

Sitting in his chair was Churchill’s henchman, Brendan Bracken. As usual, his red hair was askew and there was a malicious glint in his eye. The new prime minister’s most loyal follower, Bracken had spent the last nine months intriguing shamelessly on Churchill’s behalf against Chamberlain. Many people claimed to see a physical resemblance between the Irish-Australian newspaper owner and his hero. A scurrilous (and false) rumour had it that Bracken was Churchill’s illegitimate son. Next to him lounged Churchill’s actual offspring, Randolph. There was no mistaking whose child he was. They had come to tell Wilson to clear out.

Churchill and the Labour leader, Clement Attlee, were negotiating over the formation of a new coalition government. Labour blamed Wilson for the anti-union legislation introduced after the General Strike of 1926, as well as his hard work for Chamberlain since 1937. Attlee insisted he had to go. Churchill was more than happy to comply. Now Bracken told Wilson that if the prime minister ever caught sight of him again, he would be sent into exile as ‘governor of Greenland’. Wilson duly vacated the building. Instead of Greenland, he was exiled to his office in the Treasury until he reached the minimum age for retirement age in 1942. He was swiftly shuffled out of public life and never held a major post again.

Chamberlain had hardly been averse to getting rid of inconvenient opponents and inconvenient advisors, or the use of political dirty tricks – as Sir Robert Vansittart, Anthony Eden and Leslie Hore-Belisha could all attest – but this was something else. Wilson might completely have misjudged Hitler and perpetuated appeasement, but he was a legitimately appointed civil servant, who had risen to the top of his profession by dint of ability and application. Now he was despatched in brutal fashion by two men who were only in Downing Street because they belonged to the coterie of hangers-on around the new prime minister. Under Winston Churchill, the style of government was plainly going to be very different.

This was what Chamberlain’s supporters had been afraid of. At the Foreign Office the evening before, the former prime minister’s private secretaries, Lord Dunglass and Jock Colville, had cracked open a bottle of champagne with Rab Butler and Chips Channon, and toasted Chamberlain as the ‘King over the Water’. Butler, recorded Channon, ‘believed this sudden coup of Winston and his rabble was a serious disaster’. The ‘good clean tradition of English politics’, he lamented ‘had been sold to the greatest adventurer in modern political history’. Referring to Churchill’s American mother, Butler called the new prime minister a ‘half-breed … whose main support was that of inefficient but talkative people of a similar type’.

Looking at the associates that Churchill brought with him, it was easy to see what he meant. Bracken had made a place in London society by revelling in the reputation of a sharp-mouthed, quick-witted charlatan. Having accompanied his idol from the Admiralty to Downing Street, he now became the new prime minister’s personal private secretary and was elevated – despite the King’s protests – to the Privy Council. He liked to act as Churchill’s political fixer, keeping him in touch with what was being said in the bars and on the backbenches at Westminster and doling out preferments to keep potential critics happy.

Lord Beaverbrook, who accepted Churchill’s request to become Minister of Aircraft Production, fitted a similar mould. Beaverbrook and Churchill’s long friendship was re-invigorated during this period of great strain. ‘The Beaver’ inspired profound loathing among more conventional members of the British establishment (including Churchill’s wife, Clementine). Many observers failed to appreciate the strength of their intellectual bond. Both were highly reactive men who relied on their instincts in ways that more considered colleagues considered naïve. Beaverbrook knew how to listen to Churchill’s stories, and say the right thing to the prime minister when he was feeling down.

Beaverbrook and Bracken brought out the Tory side of Churchill: Tory not just in terms of nationalism, imperialism and anti-socialism, but also in its original, anti-puritan sense of an exuberant dislike of convention and a louche enjoyment of personal indulgence. This was the Churchill of boozy dinners, smoky late-night arguments, jobs for his in-laws, spending the day in garish dressing-gowns, and ploughing through ministerial boxes in bed. It is impossible to imagine Neville Chamberlain conducting business in this way, but for Churchill, it was part of a political life. Decades before, he and his then colleague David Lloyd George had employed a strand of Edwardian sociability – all-male dinners with good food and drink – to advance their political careers: forging bonds with wealthy businessmen and press barons, building links with clubbable colleagues, all of them doing favours for each other behind the scenes. By 1940, Churchill had developed this tradition into the lifestyle of a personal court. It prized the wit of the powerful, and disdained serious men like Chamberlain or Attlee because they were boring. It was all very corrupt and nepotistic, and in the eyes of many more democratic politicians it was deeply unsound.

For those who could fit into this world, it could be a lot of fun. Jock Colville, for example, formerly Chamberlain’s Assistant Private Secretary, who went back to work at Number 10 wearing a ‘cheap and sensational-looking’ suit that he thought would match the new government, soon found himself being drawn in as he danced attendance on Churchill. Colville was young, handsome, upper class and arrogant: a combination that Churchill liked. The nature of his job meant that he spent a lot of time with the prime minister and his family, including Churchill’s youngest daughter, Mary, to whom he became devoted. Like many of the people around the prime minister, Colville was keeping a diary.

By the time he had been working for Churchill for a month, he had decided that:

Chamberlain had drive, but he had not Winston’s probing and restless mind: he expected his subordinates to work with the same tirelessness and efficiency that he did himself, but he never questioned their ability to do so. Winston, on the other hand, is always looking for shortcomings and inspires others to be as zealous ferrets as himself.

It was ‘Winston and Beaverbrook’, Colville declared ‘who have really galvanised the country and the Government departments’.

Churchill was no dictator, but his domination of the structures of strategy gave him an influence over military matters that Chamberlain had never wanted, let alone possessed. He was absolutely convinced that this was an essential part of leading the country in war, and he would have left office if it had been taken away from him. Under Churchill, strategic debates spilled out of the committee room and into a never-ending discussion between the prime minister, favoured advisors and experts and the chiefs of staff. Unlike Chamberlain, Churchill enjoyed the excitement of being at war. He was fascinated by the minutiae of uniforms and weapons and loved the idea of returning to the front line himself. Senior officers found it hard not to be won over – at least for a while – by his boyish enthusiasm for the fight. Yet they also struggled to cope with Churchill’s approach to military strategy.

Churchill liked to paint himself as a decisive leader. In war, as in politics, his first, impetuous instincts were almost always aggressive, but given time to reflect on the verdict of history, hesitations crept in more than he would subsequently like to admit. He was not a great believer in making long-term plans, let alone sticking to them. Things changed too quickly in a war, he believed, to be tied down. He normally assumed they were going to get better – because he was an eternal optimist with a strong belief that his country was destined for glory. Personally and nationally, his optimism would prove well-founded. On 11 May 1940 he was still surrounded by potential rivals, all of them ready to take advantage of a political situation that remained uncertain. Over the next twelve months, each of them would be despatched, by a mixture of ill-fortune, misjudgement and intrigue, while Churchill, with some assistance from Adolf Hitler and the Luftwaffe, established his reputation as a national saviour.

Dr Dan Todman researches the social, military and cultural history of Britain in both world wars. His most recent book is Britain's War: Into Battle, 1937-1941.