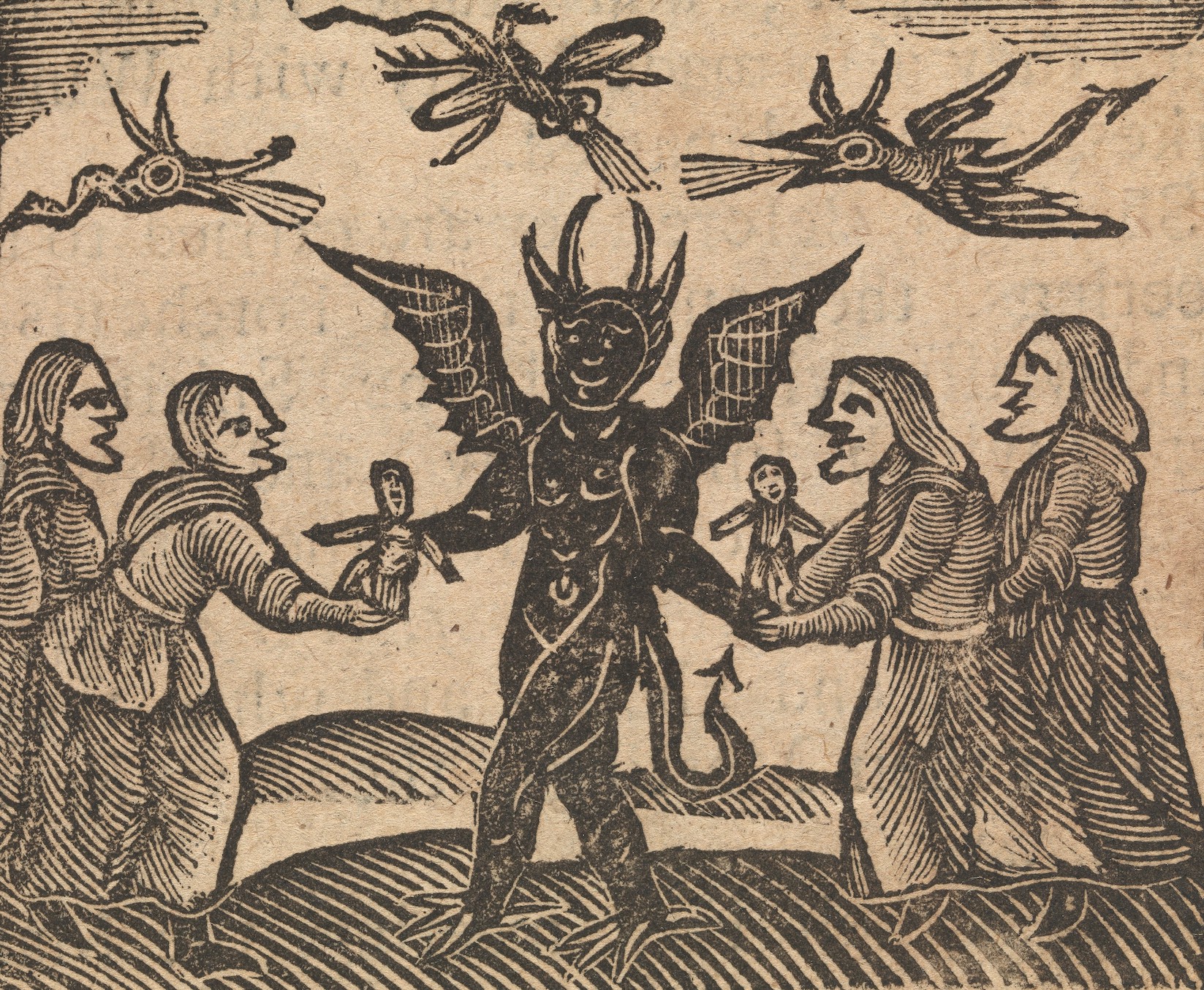 Witches presenting wax dolls to the Devil as part of a diabolical act, featured in the History of Witches and Wizards (1720): https://wellcomecollection.org/works/x7dg86we (accessed 14/11/19)

The ‘Malleus Maleficarum’ (Hammer of Witches) is a text like no other. Published in the late 15th century, it provided a guide for hunting and persecuting witches that would heavily influence the next 200 years of the European witch craze. It is one of the great landmarks in the history of witchcraft.

This post exploring the history and impact of that text is adapted from coursework completed for Peter Denley’s ‘Frontiers of the Medieval Imagination’ module.

Heinrich Kramer and Jacob Sprenger’s Malleus Maleficarum (Hammer of Witches), published in 1487, is undoubtedly one of the most important texts in the history of witchcraft study. It serves effectively as a manual for hunting and persecuting witches. Through P.G. Maxwell-Stuart’s comprehensive edit and translation of the Malleus, we can learn of what led to the Malleus’ writing, the attitude towards witchcraft and the persecution of witches in late 15th-century Europe, and the effect on the perception of witchcraft that the text had.

Why was the Malleus Maleficarum written?

The Malleus Maleficarum is as much a handbook for inquisitors as it is a personal swipe at Kramer’s opposition. 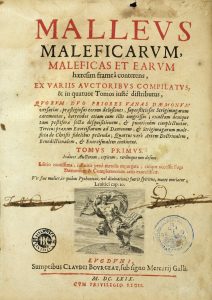 Heinrich Kramer was born in Schlettstadt around 1430 and entered the Dominican order there. He was named inquisitor for southern Germany in 1474, and was involved with witch trials within two years. Jacob Sprenger was born around 1437 in Basel, and, like Kramer, became a member of the Dominican order and an inquisitor in the Rhineland in 1470. He had a brief cooperation with Kramer, and contributed to the Malleus, although it is largely Kramer’s text.

Kramer’s trial at Innsbruck was suspended by the Bishop of Brixen Georg Golser in 1485, with all women he arrested being set free. This was the incident that justified the publication of the Malleus in his eyes. The Malleus, then, may have been Kramer addressing a personal matter framed as a wider problem.

However, the Malleus was still written to be a thorough guide for investigating and persecuting witches.

By the early 1480s the frequency of European witch trials had increased substantially. Over time, heretical elements had merged with folklore elements such as the wild ride, so differentiating witchcraft cases with prominent heresy from others was not possible. At least, not without a guide, which the Malleus would provide.

Accusations present in the Malleus such as witches being held culpable for diabolism, weather magic and infanticide were rising in the decades before the 1480s. The Malleus provided a definitive treatise encompassing these concerns.

The fifth section of Johannes Nider’s Formicarius (1435) and Pope Innocent VIII’s papal bull summis desiderantes affectibus were crucial promoting its contents. The bull’s inclusion as an introduction meant ecclesiastical and civil tribunals now had a rationale for persecution. The bull mentions incubi (demons who engage in sexual relations with witches) and maleficium (malevolent sorcery), but its importance comes from its support of the Malleus. Jeffrey Burton Russell says that it ‘opened the doors for the bloodbaths of the following century’ thanks to its support (Russell, 1972, pp. 229-30). Kramer took advantage of these supporting texts to display the dangers of witchcraft to as wide an audience possible.

The Malleus provided a clear explanation and solution to the tension surrounding witchcraft in the 15th century during a socially uncertain time. As I see it, the text is the apex and climax of the medieval witchcraft phenomenon. But what can be learned from the text itself?

What does the Malleus Maleficarum tell us?

We can discover what the text tells us by separating the investigation into three sections. Firstly, the nature of the accusations. Secondly, the trials. And finally, attitudes towards women.

The Nature of the Accusations

The Malleus begins with the question ‘is it so much part of orthodox Catholic [doctrine] to maintain that workers of harmful magic do exist that stubbornly maintaining the opposite is in every respect and in all circumstances heretical’ (Maxwell-Stuart, 2006, p. 41)? This implies that if you uphold the Catholic faith then you should believe in witchcraft and its dangers, and if you don’t then you are a heretic. This shows how serious a threat witchcraft was perceived to be in late 15th century Europe.

The Malleus claimed that witchcraft was the most abominable of all heresies, and gave four reasons as to why. They were the devotion of body and soul to evil, sexual relationships with incubi, the renunciation of the Christian faith, and the sacrifice of unbaptized infants to Satan. These were not Kramer’s ideas, showing that a social paranoia towards witches had been rising for some time, and their development continued rapidly thanks to the Malleus. Furthermore, the Malleus included many pathological fantasies, including a witch feeding oats to a nest of castrated male members. This shows the confusion and fear society had towards witchcraft.

An example the Malleus provides for the mechanism in a maleficent operation is a witch milking a knife which she has thrust into a wall in order to steal milk. The witch’s demon ‘who always works with her in everything’ is summoned and steals the milk (Maxwell-Stuart, 2006, p. 170). Along with malefice, the Malleus enhances the importance of the diabolical pact, as the witches are able to do harm ‘by the help of the devil, on account of a compact which they have entered into with him’ (Maxwell-Stuart, 2006, p. 170). This shows that the diabolical pact, malefice and other accusations were common before the Malleus’ publication, and that witchcraft was viewed as a danger to nature and the human race (Barry, Hester, and Roberts, 1996, pp. 129-30).

The Malleus made sure to stress that many of the crimes alleged against witches were real, and all others are the devil creating illusions at the witches’ behest.

The three main elements in witchcraft were the evil-intentioned witch, the help of the devil, and the permission of god (because god knows that without evil there is no good). Witchcraft was therefore viewed as such a colossal sin because it was a direct treason against God.

The Malleus even recommended a procedure which involved promising a witch mercy if her guilt was confessed. However, a mercy only to society was intended, which meant the witch’s execution. This demonstrates how witches were doomed and disregarded by society from the moment they were accused, so serious was the crime.

The Malleus was a misogynistic text. It claims that witchcraft stems entirely from carnal lust, which is allegedly insatiable in women. Philologists have even held the Malleus just as responsible as Christian demonology when it comes to the targeting of women as witches. This shows the vast influence the Malleus had on the view that witches were naturally female.

Even though the Malleus’ promotion of the hatred of women (thanks to Kramer’s senility and probable lack of total sanity) was ultimately effective, this success may have been due to the misunderstood fear of women lying within the male mythic consciousness, so the Malleus may have had the role of providing an explanation (and antidote) for that fear.

The Malleus doesn’t however mention the devil’s mark, familiar spirits, or the feasting of the sabbat, all of which became common in trials over the proceeding 200 year. This shows that it was not as much the Malleus’ new contributions to the witchcraft phenomenon that caused belief in witchcraft to rapidly grow, but rather its careful argumentation and reasoning.

What can be gathered from the impact of the Malleus Maleficarum?

The Malleus inspired many texts and witch-hunts over the next two centuries. It also resulted in diabolism becoming a central charge in most trials where it was not as common before . This shows the Malleus was decisive in an uncertain time.

However, despite its high reception by the Church and fellow inquisitors, the Malleus had contemporary critics, including scientists, lawyers and philosophers. But these became the few against the many, as not only were the departures from the witch phenomenon as set by the Malleus in the following centuries minor at most, but those who opposed the Malleus’ ideas and authority would be placed at a firm disadvantage.

The basic image of witchcraft that lingered over the next two centuries in Europe was established by the Malleus. It therefore represented all of the medieval development of the perception of witchcraft. There are, then, not many drawbacks to using the Malleus for investigating witchcraft in the late middle ages, as it is a summary of all that came before its publication, and all that came after its publication was heavily influenced by it.

Why is the Malleus Maleficarum important?

The Malleus Maleficarum is a vital text that allows us to discover why and how witches and witchcraft were revered as such a dangerous, mysterious enemy in 15th century Europe. Witches were the prime enemy of God and the human race, due to their collaboration with the Devil to commit crimes, and open treason to Christianity. The text’s detailed examples of crimes, methods of persecution, and misogyny lay the foundations for the proceeding two centuries.

Witches presenting wax dolls to the Devil as part of a diabolical act, featured in the History of Witches and Wizards (1720): https://wellcomecollection.org/works/x7dg86we (accessed 14/11/19)

I am currently in my third year studying Medieval History at QMUL, and I am applying for an MA in Medieval History at Birkbeck and an MA in Crusader Studies at Royal Holloway. This year I took Peter Denley’s module ‘Frontiers of the Medieval Imagination’ for which I wrote this piece. Although my dissertation concerns the Dome of the Rock in Jerusalem, I have always been fascinated by the European witch craze, and the Malleus Maleficarum in particular will never cease to enchant me.

The ‘Hammer of Witches’: An Earthquake in the Early Witch Craze was first published on Friday 24th January, 2020