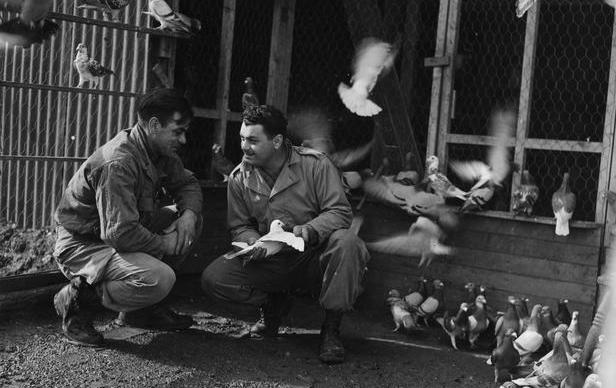 THE US ARMY IN BRITAIN, 1942-1945 (EA 61372) Corporal Florian S. Nowak and Private First Class Ralph Pellegrin of the 280th US Army Signal Pigeon Company examining a German carrier pigeon captured in Belgium. Photograph taken in their unit base in an unknown location in England, 30 March 1945. Captured pigeons were send there for breeding and all birds in the US Army service were trained by the Company. Copyright: � IWM. Original Source: http://www.iwm.org.uk/collections/item/object/205409483

In this final post in our three-part series, we join Dan Todman’s students as they are about to run their first undergraduate Twitter conference.  To catch up, read about the pedagogy behind the conference in part one, or the preparations in part two.

The students set up the account on 25 February 2019, with the conference on 4 March. Their appeals for followers got a lot of support from other members of staff in the School of History at QMUL, as well as from other historians on Twitter. By the time the conference started, the @QMUL_lonwar account that the students had set up for the conference had 543 followers – an amazing mix of people including the eminent (the Director General of the Commonwealth War Graves Commission), celebrities (Dan Snow, Al Murray), academics from Europe, Australia, New Zealand and the US (from PhD researchers to senior professors), First World War experts who work outside the academy and QMUL alumni, as well as hundreds of other Twitter users who were passionate about history. I have never lectured to an audience this big, and it was exciting (and slightly terrifying) that so many people were interested.

The students prepared the presentations to load automatically via Tweetdeck (or rather, the one student who knew how to use Tweetdeck taught the others – another good example of a characteristic of those I’ve taught on this module, which is that they might not be ‘digital natives’, there is always at least one who can figure out a digital solution and teach it to their peers). I should have arranged for this and the replies to be projected onto the board in the seminar room. Instead, everyone was looking at different laptops. The students sent out individual tweets through Tweetdeck (with specific hashtags which meant their whole presentations could later be gathered as moments) rather than threads, which made things harder to follow after the event. They also used a mixture of their own accounts (where they chose) and the shared one to reply to questions, which made it even harder to track what was going on – but it also felt very energetic and there were plenty of opportunities to ask me if there were things they weren’t sure how to respond to.

You can see the presentations here – and get a sense of just how much creative thought and structuring went into designing them.

As the questions came in, we discussed as a group how to respond to them. This gave a framework and helped to demystify the process of how historians answer questions in a conference setting. I elicited some different formats – thank you, how interesting, I have an answer/I don’t have an answer but I know something related that might interest you/I don’t have an answer but do you? They were brilliant at employing these though sometimes they needed help understanding very well intentioned questions using unfamiliar conceptual terms (don’t we all). I was immensely grateful to all those who asked questions, including several colleagues (among them Catriona Pennell, Jessica Meyer, Chris Kempshall and Robert Dale) who took time to ask something of every student they could.

Every student who took part got at least one interaction with an academic or other expert from outside QMUL. Everyone came away with a new source to look at or a new idea about their project. So as well as the experience, the conference helped to improve their dissertations. I was very satisfied with the extent to which they’d got to practice being real historians – testing out their primary research on a bigger audience – but also with the way that the event generated a sense of accomplishment and success.

But what did the students think?

After the conference, I asked them all to write me a couple of lines about it – one saying what had been good and one what could have been improved. The positive comments could be divided into three groups – those that valued the range of input (‘It was incredibly useful to have the opinions, suggestions and questions of academics studying similar (and, often, very different) subjects to my dissertation – having a mix of opinions from both sides allowed me to consider a wider spread of new topics’); those that mentioned issues of emotional support and morale (‘It was nice to hear from other historians in my field that my work fascinated them, made me feel less lost and more confident’, ‘It was nice to be so encouraged, and be told that your research is amazing at a time of year when things start to feel a little shaky’); and those that mentioned the reflective effect on their own work (‘It made me question my initial line of argument and also gave me good contacts to help build on my secondary research. ‘It made me realise what I did know, and gain some legitimacy in my knowledge by sharing it with others.’) Their ideas for improvement were either about specific technical details (‘Organise each person’s presentation into individual threads’) or about timing – two students suggested that the conference should have run over multiple days to give more time for reflection and discussion (‘Replies were all coming in at once which made it a bit confusing to differentiate whose presentation it is regarding etc, so maybe do 1 presentation per day to allow for the replies to be coordinated and easier to manage the notifications?’; ‘Perhaps have 2/3 per day across a week’). I’d be interested to know from others who’ve used the format whether there’s an optimum balance between the excitement of a concentrated conference and the structure and calm of one that takes place over the longer term. The next question that we might like to address as a community is whether it is possible or desirable to conduct this sort of conference at scale. Could you do it involving every First World War Special Subject in the country for example?

At the end of the module, one of the students wrote to me about what a positive experience he’d found the whole thing. One of the things for which he said he was ‘grateful’ was the ‘breakdown of the gulf that I had in my mind between myself as a student and academics. I think the twitter conference was absolutely vital for that’.

I hope comments like that encourage you to have a go at something like this for yourself!

Professor Dan Todman is Head of the School of History. He researches the social, military and cultural history of Britain in both world wars.