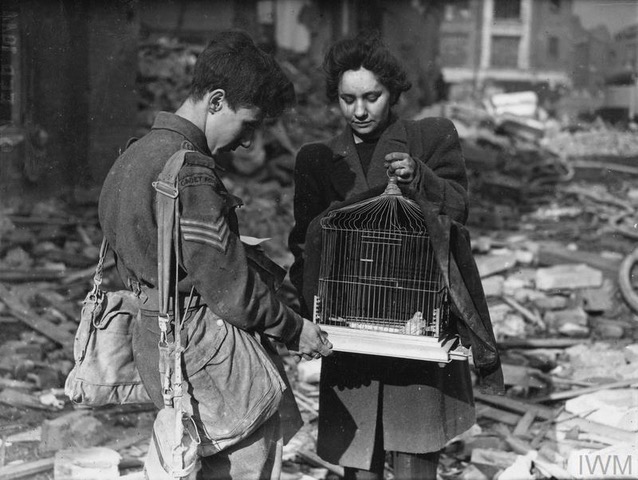 Can you run a student conference on Twitter?  In March this year, Dan Todman and students on his final undergraduate year history Special Subject set about finding out. In part one of a three-part series of posts Dan explains the origins of the conference and how he hoped it would enhance teaching on the module.

I’m intensely proud of the research work done by the students on my third year module ‘Exhibiting the First World War’, both in class and in the associated dissertations. For a long time, I’ve sought different ways to give them more of a historical presence – including working with radio and making them part of academic seminars. When I saw the Twitter conference run by the Stuff of War Society, itself based on the one held by the Underpinnings Museum, I was really excited – I wanted to see if something similar would work for undergraduate researchers.

‘Exhibiting the First World War’ is one of about twenty different Special Subjects we teach at QMUL History each year. These are small group, primary source based classes, each taught by an academic on their area of expertise. Every student also writes a 10,000 word dissertation, supervised by their Special Subject teacher, on a subject broadly (sometimes very broadly) connected to the module. The taught component of this Special Subject focuses on researching London in the First World War, students are this year writing dissertations on a very wide range of topics in the history of modern London and the two world wars.

We’ve tried to give students experience of presenting their work-in-progress before – including in-class research presentations to their peers and more formal presentations to other academics in the School. These were never very fulfilling events. Students often give great feedback to their peers in small groups or as dissertation buddies, but in whole seminar discussion they often didn’t feel they had the expertise to critique each other’s work. They found presenting to an academic they didn’t know (who was often not a subject expert) artificial and alienating. Verbal presentations took a long time, and in terms of audience attention and quality of questions, the last person up definitely drew the short straw.

A Twitter conference seemed like it might be a better way to achieve some of the same objectives as an in-person presentation to another academic. The format is simple – each paper gets a time slot and a standard number of tweets (8-12) of 240 characters and an image. The strictures of the Twitter conference structure and the lack of verbal explanation encourage the presenter to condense their work, organise their argument, and find creative approaches to get their message across.

One of the things I try to do on my Special Subject is to give students a ‘real’ research experience, which ought to include presenting their work in a more public setting. The taught component of the module is based, like Hasok Chang’s co-written history of chlorine, on the idea that undergraduate researchers, working collectively and over time, can make a significant contribution to an academic field.  Some of the individual research that they conduct is outstanding: it’s sad to think that some of it is effectively lost to history as soon as its marked when it ought to be better known. I hoped that a more public forum might help to break away from a very isolated individual model of dissertation research that looks increasingly outdated and unhelpful for future careers inside and outside the academy. Maybe students could be encouraged to think about how helpful mutually supportive networks were, not just to broadcast research findings but to find ways to answer questions or to be encouraged to think in new ways? In so doing, might they reflect on what researchers have to do if they want to sustain these networks and help them flourish?

In so doing I was trying to replicate my own experience of the academic networks that exist around the First (and to a lesser extent the Second) World Wars. I was very fortunate to come of age as a historian in a sub-field which encouraged collegiality and intellectual generosity. Much of this was down to the establishment of the International Society for First World War Studies by Jenny Macleod and Pierre Purseigle – and to a cohort of PhDs and supervisors who generally bought into an idea that they were part of a collective endeavour built on respectful and helpful interaction, between scholars who were at different stages of their careers and with different approaches, but who all wanted to understand the same thing. It isn’t perfect, I’m sure it hasn’t worked for everyone, but it has matured over the years into a self-replicating academic eco-system that feels stimulating and supportive.  One of the complaints I often hear from fellow historians of the Second World War is that we haven’t yet managed to build the same sort of environment, but the new Society for the History of War is definitely built on similar ideas. I had previously talked with other First World War historians about trying to arrange a dissertation conference for all our students across institutions – but it just proved very difficult to arrange, not least because every university had a different timetable for research and writing to which students had to work. So a Twitter conference for just this seminar of students seemed like a more do-able project.

Professor Dan Todman is Head of the School of History. He researches the social, military and cultural history of Britain in both world wars.