Biology, ecology and other ‘elephants’ 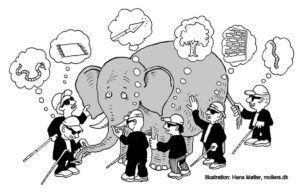 “Nothing in biology makes sense except in the light of evolution,” Theodosius Dobzhansky, 1973.

“Nothing in evolutionary biology makes sense except in the light of ecology,” Peter and Rosemary Grant, 2008.

An elephant enters a room followed shortly afterwards by six blind scientists. One scientist grabs hold of the elephant’s foot, another it’s tail, and a third its tusk, etc. Focussed on different parts of the elephant’s anatomy and unaware of each other’s presence (for the sake of the parable, let’s imagine the scientists are also deaf and dumb), none of them realises they are studying the same object, much less that that object is an elephant.

For Nils Christian Stenseth of the University of Oslo’s Centre for Ecological and Evolutionary Synthesis, the elephant is biology and the scientists the various sub-specialisms into which the discipline has fractured. But the parable applies equally to history and the study of disease ecology where increasing specialisation and the pre-occupation with narrow technical questions often leaves scholars ignorant of or unengaged with relevant developments in adjacent fields.

It was in an effort to break down these barriers that on 7-8 July, 2016, Queen Mary’s History Department and the Life Sciences Initiative brought together historians, anthropologists, epidemiologists and biologists for two days of discussion on the intellectual origins of disease ecology. That the venue for these exchanges was the Geography Department struck us as particularly appropriate given the relationship between what used to be called medical geography and medical ecology and the importance of landscapes and borders for the adoption (or non-adoption) of more complex ecological ideas by medical microbiologists in the middle decades of the 20th century.

Posing the question in 1998 where did the modern, ecological understanding of infectious disease come from?, J. Andrew Mendelsohn argued that it was hard to see how “the fledgling ideas and methods of upstart population ecology, or the premises of parasitology could have conquered bacteriology.” Instead, Mendelsohn argued these perspectives were already present in medical microbiology at its inception and re-emerged more strongly in the interwar and post-war period, often from within the very institutions (the Rockefeller, the Robert Koch Institute) most closely associated with germ theory and reductionist methodologies.

Recent scholarship has complicated Mendelsohn’s picture, however. Just as one cannot make sense of biology without evolution and one cannot make sense of evolutionary biology without ecology, so speakers at Making Microbes Complex argued one cannot make sense of disease ecology without taking into account the contributions of animal and landscape ecologists in the 1920s and 1930s and their critical insights into population dynamics and interactions of organisms within ecological niches, whether those organisms are animals, insect vectors or the plants on which they feed. As David Morens reminded us, epidemics of Hanta Pulmonary Syndrome tend to coincide with the flowering in America’s southwestern deserts of the quila plant, a key food source for the rodents that carry the Hanta virus, hence the old Mayan saying, “When the quila booms people die.”

The early contributors to disease ecology included not only well-known figures such as Charles Elton and A. J. Nicholson, but the Russian zoologist Evgeny Pavlovsky whose concept of “natural nidality” — a term derived from the Russian word “ochag”, meaning “hearth” or “home” – appears to have had a much wider influence that was previously supposed, and not just on Soviet thinkers sequestered behind the Iron Curtain. In a fascinating talk, Susan Jones and Anna Amarina showed how Pavlovsky’s ideas were taken up in the 1950s by the Californian microbiologist and plague investigator Karl Meyer and in the 1960s by the World Health Organization. Wherever ecological ideas emerged, however, they did so in specific political and material contexts. In the Tsarist period, these “entanglements” drew on the zemstvo tradition, the idea that a citizen received his or her health care according to where they lived geographically. In 1950s Australia, where Frank Fenner, inspired by the ecological perspectives of Frank Macfarlane Burnet, studied the evolution of the myxoma virus in wild rabbit populations, they drew on Cold War thought styles and, according to Warwick Anderson, could be seen as a form of biological warfare. Indeed, to the extent that myxomatosis is now regarded as the classic case study of parasite-host interactions, Anderson suggested, “one might suppose that we are all rabbits now”.

Other speakers made the case for other mammals. Thus in Kazakhstan and Mongolia, Christos Lynteris and Michael Kosoy, showed how by the 1920s the spatio-temporal entanglements of plague increasingly implicated marmots; by contrast, employing the latest climate and DNA sequencing data, Stenseth argued that it was not marmots or the black rat that spread plague along the caravan routes to Asia and Europe but gerbils. Meanwhile, Pierre-Olivier Méthot showed that it was while observing “inapparent infections” in guinea pigs inoculated with typhus at his laboratory in Tunis in the 1920s that Charles Nicolle — who was later hailed as the father of French medical ecology — recognised the importance of the phenomenon for the “life, birth and death of infectious diseases.” Similarly, Mark Honigsbaum showed how René Dubos’s studies of tuberculosis and the effect of nutrition on the fecal flora of germ-free mice in the 1950s, awakened the Rockefeller researcher’s interest in ecosystems and the interaction of the “total body” with the “total environment.” The result was that rather than take Pasteur’s “pure culture” road, Dubos decided it would be more profitable to take the road – in Robert Frost’s words “less travelled by” — namely, the road that, as Dubos put it, “lead to physiological and ecological studies.”

While not resolving Mendelsohn’s question, it was felt that progress was made in describing the intellectual and scientific networks within which ecological ideas circulated in the interwar and immediate post-war periods and their entanglement with other histories, including colonial histories. Reconstructing these “ecologies of knowledge,” to take up Charles Rosenberg’s useful phrase, offers one way forward. Another is for medical historians to pay closer attention to what Anderson calls “edge effects” — a term borrowed from the science of ecology – in the construction of modern conceptual borderlands.

As we return to our disciplinary silos, our visions hopefully broadened, these are calls we intend to take up in the coming months and years as we continue to sketch the history of this emergent field. It is a history that we believe is highly relevant not only to past but also to current understandings of epidemics, as wells as to the medical and political responses to emerging infectious diseases such as Ebola and Zika. And it is history that reminds us that howsoever we try to make sense of the complexity of the microbial world, microbes invariably have the last word.